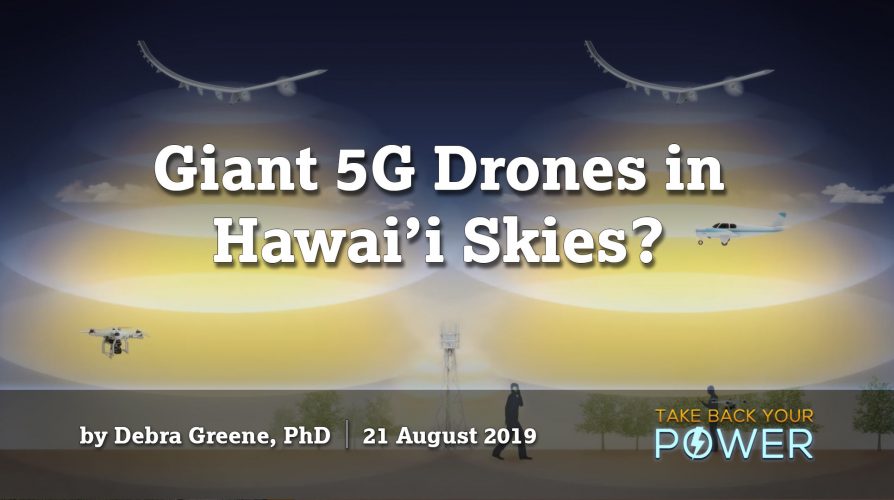 Massive football field sized drones flying in the stratosphere, beaming down toxic 5G radiation into the earth, into the ocean, into our homes, into our bodies. Sounds like something out of a science fiction nightmare.

But if the sponsors of the HAWK30 program, tech giant SoftBank of Japan, defense contractor AeroVironment of California and Alphabet, the parent company of Google, have their way that nightmare will become a reality this fall for some Hawai’i residents and eventually for much of the world’s population.

The HAWK30 program, proposed by the Research Corporation of the University of Hawai’i (RCUH), wants to use the Hawaiian island of Lāna’i in Maui county as a launch pad for unmanned drones, HAPS (high altitude platform stations) flying at 65,000 to 80,000 feet carrying wireless communications relays and transmitting 5G signals into air, land and sea in a three-phase program.

In the final phase of the surreal plan, tiny Lāna’i island becomes a drone manufacturing plant, launch pad and mission control center to fly massive drones throughout the equatorial belt.

According to their Use Determination Application: “The purpose of the HAWK30 program is to develop new airborne overhead 5G communication, which would provide strong wireless service over a large area, including deep valleys, remote lands, and over the ocean.”

The Federal Aviation Administration (FAA) granted the project a COA2, a Certificate of Authorization, permitting the drones to operate for up to two years in a 150 square mile airspace that includes the islands of Lāna’i and Kaho’olawe, as well as Molokini crater, which sees over 300,000 visitors from around the world each year. With its calm, crystal clear waters and hundreds of species of tropical fish the crescent shaped islet is a highly popular visitor spot.

Radiation harm is a concern as one HAWK30 drone broadcasts the equivalent of 1800 cell towers, albeit at a much lower power level, however, power is irrelevant to health effects except for tissue heating. Thousands of peer reviewed research studies document the non-thermal effects of wireless radiation on humans and other living things. In some experiments the lowest power levels caused the most leakage in the blood-brain barrier. An inverse relationship between power and health effects has even been shown. Wireless technology is not made safe by reducing the power.

Flying at 70 miles per hour in the stratosphere, the HAPS drone has a 260 foot wingspan and 10 propellers. It gains altitude after take off by flying in a huge spiral. The high altitude platform station can be used to carry a variety of payloads. According to SoftBank’s concept video, their HAPS operates as a cell site with coverage 124 miles in diameter, blanketing the entire ground.

In addition to irradiating all life forms within range, this type of massive flying wing has a bad safety record. Two high altitude drones have been built by AeroVironment and they both fell from the sky and crashed. In fact, the drone is so experimental that almost no regulations exist to govern it. Project officials appear ready to take full advantage of this, having boasted about schooling the FAA and writing their own rules.

The drone would encounter air resistance, of course, but if this massive experimental aircraft, with its lithium batteries and propeller blades, comes crashing down it could kill and maim people, dolphins, whales and other creatures. Surprisingly, the drone’s fly zone is in the middle of a Humpback Whale National Marine Sanctuary where whales come to give birth and frolic with their young.

Trust has been an issue from the start with this secretive project. A 16,500 square foot drone hangar to house two drones was erected on agricultural land without public notice and prior to a Lāna’i Planning Commission meeting, showing a lack of good faith.

In the Use Determination Application the drone is repeatedly referred to as an “airplane” or “aircraft” and an airstrip was created while, in Maui County, airports are not allowed on agricultural land.

A longtime traditional Hawaiian practitioner is intervening in the approval process based on the potential violation, requesting protection of his native Hawaiian traditional practices that involve gathering plants and other items on the undeveloped land. Approving agricultural land for industrial use could set a precedent. It could also pave the way for construction of a second airport.

Despite announcing as early as July 16 that, due to public outcry 5G was removed from the project, and then changing their story in a press release, as of this writing RCUH still has not amended their application to reflect this promise to the community.

Even if the application is amended to remove 5G, applicants have said 4G would be used instead, as if beaming 4G wireless radiation into land and sea is safe. It is not. Further, even if removed from the application, 5G can be brought back at any time.

RCUH has shown a lack of transparency by providing scant information about the elaborate project and pressuring for a rushed decision. Completely absent from the application, for example, is any mention of the specific frequency range of electromagnetic radiation the drone will transmit. Missing as well are a timeline for the project and a business plan.

What lies between approval and rejection of the project is the nine member Lāna’i Planning Commission, a body of volunteers, tasked with assessing the $120 million project to determine if 215 acres of former pineapple land should be used for the HAPS drones.

To justify an agricultural use RCUH has promised watershed characterization and a STEM (science, technology, engineering and math) program for Lāna’i youth. Wireless enabled probes, resembling PVC pipe bombs armed with sensors, would be inserted into the island’s watershed and tracked by the drones, potentially irradiating the waters as they collect data nonstop.

The 3100 residents of Lāna’i may be hesitant to speak out against the project because it could be seen as indirectly backed by billionaire Larry Ellison who owns 98% of the island. The Oracle founder appears determined to bring his high tech world to permanently change the culture of this small, rural island situated in the most remote landmass on the planet.

In the wake of the drone proposal the Hawaiian islands have been the target of Google’s huge high altitude helium balloon, LOON, which also flies in the stratosphere and is designed to bring high speed internet to inaccessible areas and to share connectivity with the HAPS. The LOON transmits wireless radiation to the ground extending signals over 3000 square miles.

The mysterious object, that the FAA had no knowledge of, was spotted by Maui residents, while the HBAL663 LOON was tracked online circling above Maui county for about a week (7/31/19 to 8/7/19) at around 60,000 feet. The tennis court sized balloon passed right over the designated drone flight strip area on Lāna’i, perhaps to collect weather and wireless communications data in preparation for the drone launch, since the two projects are partnered.

Having tech giants Google and SoftBank with their global corporate ambitions at your doorstep would be overwhelming for even the most seasoned, savvy corporate executives. The Lāna’i Planning Commission, whose members are volunteers, is ill equipped to deal with a complex project of this magnitude that has vast implications, far beyond the confines of the small island.

Final plans are to turn Lāna’i into a drone manufacturing plant and launch pad potentially flying thousands of massive drones over much of the world’s population forming a 5G mesh network for the Internet of Things (IoT) while blanketing the earth in wireless radiation.

Take a moment to sign & share the below petition, which will be received by Hawaiian elected officials. Thank you!

Wireless technology poses significant harm to humans, animals, marine life, and the environment. We do not consent to this harmful and invasive technology. We respectfully ask you to please protect the Hawaiian islands, follow the Precautionary Principle and ban this technology from Hawai’i airspace unless it can be proven safe.

Wireless technology poses significant harm to humans, animals, marine life, and the environment. We do not consent to this harmful and invasive technology. We respectfully ask you to please protect the Hawaiian islands, follow the Precautionary Principle and ban this technology from Hawai'i airspace unless it can be proven safe.