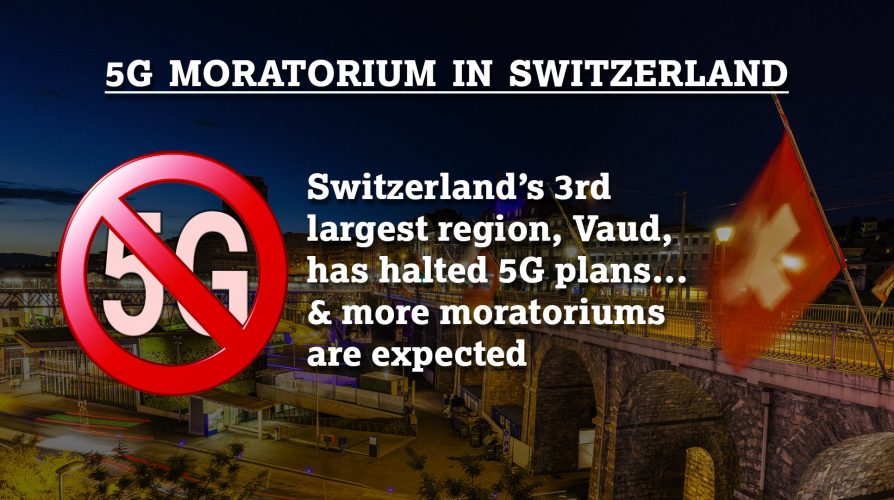 UPDATE 9 APRIL 2019: A follow-up breaking article has just been posted here [see auto-translation], which leads with, “Other cantons could follow [with moratoriums] in the next few days. Operators are furious.”

UPDATE 17 APRIL 2019: In Switzerland, even though some cantonal governments have blocked the granting of permits for new antennas or have adopted a 5G moratorium, the telecoms bought the 5G licenses from the federal government, so they’re using their existing antennas to start deploying 5G. Greater grassroots involvement is needed. The updates we have provided were not a victory call — but rather a reason to hope and a call to join the movement on the ground where you live.

Originally posted in French, at LeTemps.ch. English translation is below.

After several twists, the Vaud Cantonal Parliament (Grand Council Vaudois) adopted Tuesday a resolution calling for a moratorium on 5G antennas. The measure should apply until it receives the report of the Swiss Federal Office for the Environment on this new technology.

After a long debate, obfuscated by the intervention of the Swiss State Councellor Jacqueline de Quattro, the Vaud Parliamentary representatives said “yes” to the resolution tabled by the Environmentalist “Green” Party Raphael Mahaim by 95 votes for the motion against 9 against it and 25 abstentions. However, they amended the text by establishing a clear timeframe.

In his speech, Raphael Mahaim emphasized that the announced arrival of 5G was completely lacking planning or coordination. All this does not respect in any way the “the Helvetic tradition of the as it should be“.

Note from TBYP Editor: Earlier today, Raphael Mahaim has stated on Facebook (translated): “In response to the parliamentary resolution from the Swiss Environmentalists (the Swiss ‘Green’) calling for a moratorium on 5G antennas, the Swiss Grand Council has voted a few minutes ago, and the Swiss State Council announced the suspension of permits issued by the State of Vaud. This is excellent news that puts the canton of Vaud at the forefront of this citizen reaction!!!! The work carried out in recent weeks by the Vaudois Greens is paying off”

Over fears, uncertainties, pressures from certain business circles, Raphaël Mahaim asked for caution and consideration. Most importantly, to wait for independent analysis of the impacts of 5G on health as well as on nature and society, including levels of electricity consumption.

The Head of the Liberal-Radical Parliamentarians, Marc-Olivier Buffat, denounced in those points the wish of the Environmentalist to “surf on fear and concern” in order to boost with “disaster-mongering” his campaign for the federal election this fall. According to Buffat, the standards on emissions are already much more strict in Switzerland than anywhere else in Europe.

The Issue of Trust

For the representatives who spoke, the precautionary principle is appropriate, without technophobia. We must wait for the conclusions of the Swiss Federal Office for the Environment on 5G. “You have to trust scientists,” said Jean Tschopp, for example.

For the representatives of the radical left, it is nevertheless imperative to keep having concerns about the scientific expertise, as expressed Jean-Michel Dolivo. “No to blind faith,” he said, pointing to the pressures from the business community that he believes can capture scientists.

The debate on the 5G antennas became somewhat confusing when Swiss State Councellor Jacqueline de Quattro made her address. She announced that the Swiss Council of State had decided on a moratorium. In agreeing to support the amended resolution, “you are going in the same direction as the government”, she continued.

Absent at the beginning of the debate, the Swiss State Councellor arrived only after being asked to via messages, she said. Her colleague Pierre-Yves Maillard, who is in charge of health, should have answered questions from the Parlementarians, but in the end did not express himself on this subject.

5-MINUTE “TAKE BACK YOUR POWER” ACTION: We ask those with a scientific understanding to please send a brief email to the Swiss Federal Office for the Environment, since they are working on a 5G report. Please link to the established science, and highlight the office’s accountability (and liability), in a respectful way.