7 Things Every Health Practitioner Needs to Know About EMFs

Despite the increasing reports of people who report feeling symptoms of “electro-sensitivity” from cell phones, wifi routers, Bluetooth devices and other sources of microwave radiation, mainstream medicine continues to bury its head in the sand and ignore the issue.

On the other hand, most of the top functional medicine practitioners in the world — include Dr. Dietrich Klinghardt, Dr. Zach Bush, Dr. Dan Pompa, Dr. Ben Lynch and Dr. Tom O’Bryan each claim that “EMF removal is essential for proper healing”.

Above: Watch the October 30, 2018 live Q&A with Nick Pineault: “The Truth About EMF Radiation”

Let’s look at 7 important facts most health practitioners do not know about EMFs:

Fact #1: Our EMF Safety Standards Are Based On Heating Effects, NOT Biological Effects

The 1996 EMF safety standards that are supposed to protect each and every of your patients/clients are based on the false premise that the only way that EMFs can hurt our biology is by causing overheating.

This myth is completely unscientific, considering the fact that publicly-available research published by the NASA in 1970,[1] the US Naval Medical Research Institute (NMRI) in 1971,[2] the US Defense Intelligence Agency (DIA) in 1976[3] and countless others show that EMFs can and do cause damage through non-thermal mechanisms.

In other words, our current safety standards are based on a false premise, and therefore do not protect anyone against the harm caused by microwave radiation.

This graphic originally created by EMF engineer and activist Alasdair Philips from the advocacy group Powerwatch UK shows how much our “Electrosmog” exposure has increased in a few decades, and especially in the last 2 decades.[4] 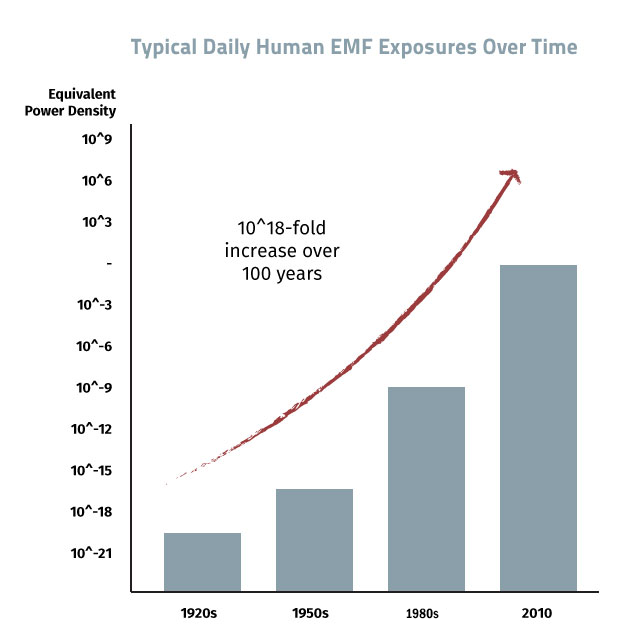 The amount of new cell phone towers and wifi hotspots that have been installed just in the last 15 years is also nothing short of staggering.

These new sources of microwave radiation are filling our planet with more and more electro-pollution, again, based on the false premise that they are completely safe.

Fact #3: A Few Days Ago, The NTP Study Has Shown That EMFs Are A Class 1 “Definite” Carcinogen — Next To Tobacco & Asbestos

Just a few days ago, the $25 US NTP study has published their conclusions after running one of the most important and costly studies around cell phones and cancer ever conceived.

Their initial goal: proving without the shadow of a doubt that cell phones are safe.

What they found: the opposite; rats and mice exposed to cellphone radiation have shown “Clear Evidence” of an increase in multiple tumor types.[5]

“The NTP has now shown what no one believed was possible before the project started. The assumption has always been that RF radiation could not cause cancer. Now we know that was wrong.”

If the NTP study was to be considered as part of a future re-classification of EMFs by the World Health Organization’s International Agency for Research on Cancer (IARC), EMFs would likely become a Class 1 “Definite” carcinogen next to tobacco and asbestos. It might take years before this decision is taken though, considering the huge industry pressure and controversy around the topic.

Fact #4: Your Patients Are Being Exposed to EMF Levels Worse Than Rats in the NTP Study

A lot of critics of the NTP claim that the radiation levels rats were exposed with (1.5, 3 and 6 W/kg) are way higher than what most cell phone users are being exposed to — and try to discredit the studies’ findings for this very reason.

Technically speaking, they are right. In the US, cell phones cannot be legally sold unless they have an “SAR” (specific absorption rate) of 1.6 W/kg or less.

The problem? This SAR is measured at a distance of 5 to 15 millimeters from the dummy head used in test facilities.

The bigger problem? When tested ON the body (no separation), French advocacy group Alert Phonegate[6] revealed that 90% of all cell phones miserably fail the safety testing, and that certain phones go over 20 W/kg, which is over 9 times the FCC safety limits.[7] 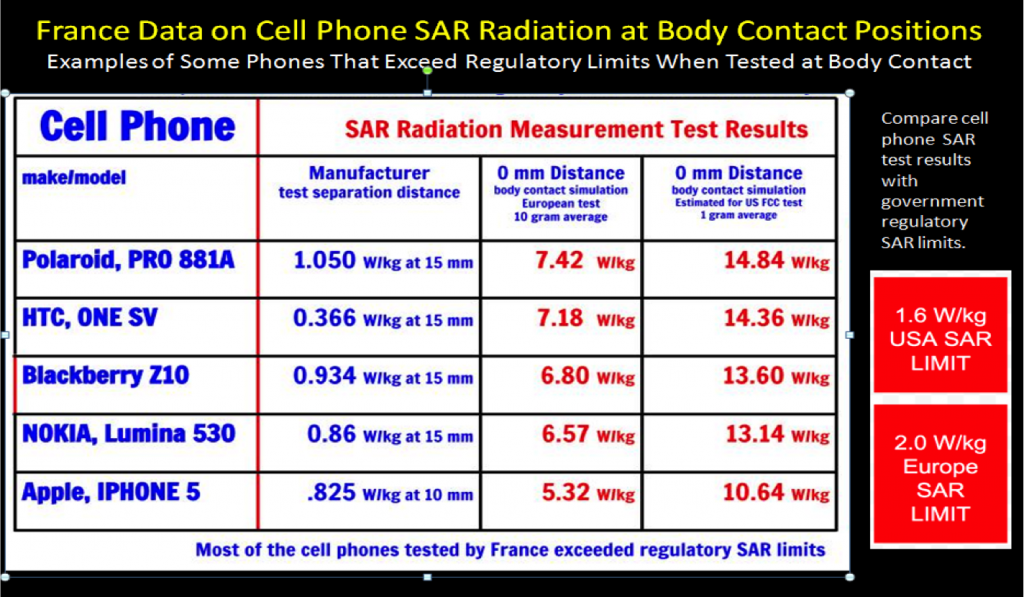 Fact #5: 35% of Your Patients Suffer From EMF-Related Symptoms, But All Are Affected

According to the most conservative estimates of independent EMF researchers, at least 35% of the population suffers from “mild to moderate” symptoms of electro sensitivity, including fatigue, sleep disturbance, headaches, difficulty concentrating, depression, memory loss, hearing disruptions, skin problems and cardiovascular issues.[8]

This corroborates the clinical observations of the top functional medicine practitioners like Dr. Dan Pompa, who recently shared with me that “50% of all his clients are very sensitive to EMFs”.[9]

It’s important that on a cellular, all of us are affected by EMFs — even if we might not feel any symptoms from this exposure.

The work of Dr. Martin Pall[10] from the Washington State University has shown that EMFs trigger calcium release inside the cells, leading to a slew of downstream biological effects including opening of the blood-brain barrier, oxidative stress, single and double DNA strand breaks, and many more.

Fact #6: EMF Science is Polluted By A Strong Industry Bias

Pretty unsurprisingly, the trillions-of-dollars-strong Telecom industry is using the exact same playbook that has been used in the past by Big Tobacco — polluting the current available science with “no effect” studies in order to manufacture doubt.

In a 2007 review, researchers revealed that studies funded by the Telecoms might be up to 10 times more likely to find no biological effect, which represents a bias 2.5 times worse than Big Pharma…[11]

The industry seems to be unable to control the endless flow of studies which have come out in the last 2 decades alone though — and which do show biological effects.

The nonprofit group “Oceania Radiofrequency Scientific Advisory Association” (ORSAA) looked at 2399 peer-reviewed papers published since the year 2000. Of those, 61% of those showed biological effects, while 26% did not.[12]

ORSAA has also confirmed that study databases on radiofrequency EMFs “are seeded with industry sponsored ‘no effect’ studies raising the question of reliability and trustworthiness of a large section of papers.”

Fact #7: Things Are Going To Get Worse [Before They Get Better], And You Need To Learn More About EMFs Now, Not Later.

The advent of the 5G networks will demand the installation of millions of additional “small cell” antennas in the US alone — installed every 3 to 12 homes in residential areas, and on every traffic light pole in downtown areas.

This technology is being rolled out, once again, based on the false premise that non-heating biological effects do not exist, a myth that has been dispelled for more than half a century, if not more.

As a practitioner it has become critical for you to learn how to add EMFs to your practice, which includes:

Investigative Health Journalist and GreenMedInfo collaborator Nick Pineault has teamed up with some of the best minds in healing including Dr. Dietrich Klinghardt, building biologists, independent scientists and many other collaborators to create “Electrosmog Rx”, the world’s 1st EMF course for health practitioners.

It is heavily discounted until November 14th at the following link: http://electrosmogrx.com/tbyp 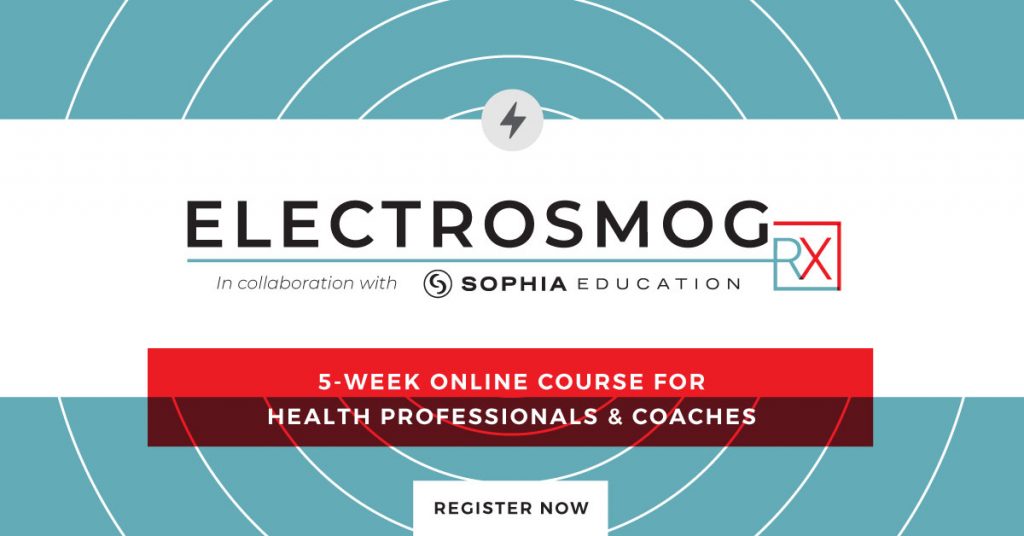 [4] The original graphic can be found here: https://s3.amazonaws.com/esrx1811/philips-lamburn-EMF-RF-exposure-graph-v8.jpg