About ‘Take Back Your Power’

The award-winning documentary Take Back Your Power uncovers the shocking story behind why hundreds of local governments are standing against the multi-billion dollar rollout of ‘smart’ utility meters. Take a journey of revelation, examining evidence of in-home privacy invasions, systemic over-billing, extortion, health & environmental harm, fires and unprecedented hacking vulnerability. And be inspired by emerging solutions.

With compelling insight from whistleblowers, government agents, lawyers, doctors, researchers and environmentalists, Take Back Your Power investigates the claimed benefits and emerging risks of a profit-based global initiative that seeks to change the way we live. What you’ll discover will surprise, unsettle and ultimately empower you.

The original Director’s Cut edition (102 mins) of Take Back Your Power was released worldwide on September 5, 2013. The 2014 Edition (88 mins) was released in June 2014 – with new scenes, a shorter running time of 88 minutes, and Spanish, French and English subtitles.

As of July 2017, Take Back Your Power has been screened publicly in more than 300 venues worldwide. 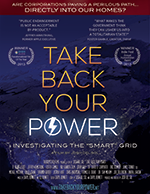 Josh del Sol leads the Take Back Your Power action community, which is instrumental in the campaign to redirect 5G toward safe technologies. The TBYP community has grown to more than 200,000 participants. Join here: https://takebackyourpower.net/subscribe

In 2013, Josh directed and produced the Take Back Your Power documentary: winner of the AwareGuide Transformational Film of the Year, the Indie Fest Annual Humanitarian Award, and Leo Award for Best Feature Documentary (British Columbia).

Born and raised near Vancouver BC, Josh is passionate about human rights, consciousness, decentralized energy production, safe technology and fatherhood. His hobbies include hiking, research and travel.  He lives in Washington State with his daughter.  Josh can be reached through our contact page.