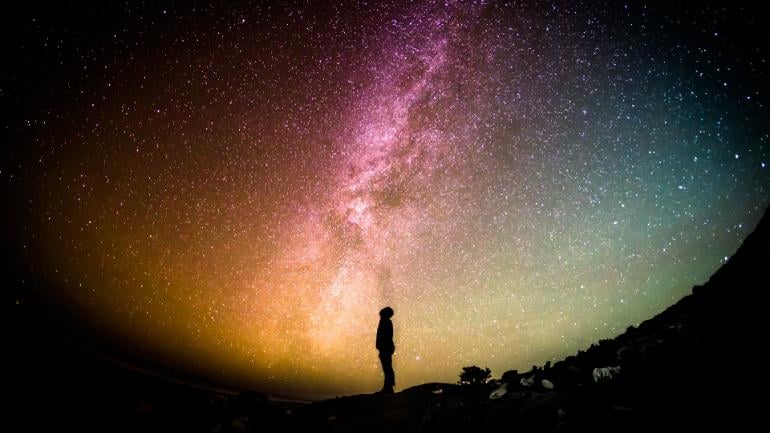 The universe (or timeline) our world has been on, is closing down. There’s something fundamentally wrong with it.

However, a more solid and glorious universe is available to us. It’s right there in the wings, awaiting whenever we feel we’re ready.

The paradox is that the shift to the “primary” universe of awesomeness is not made by escaping our current one — but rather by showing up here, real and raw. Here, in this broken universe.

This is a theory I am exploring, anyway.

Yesterday I read an article by my friend Dr. Deborah Greene, in which she posits that there’s something fundamentally amiss with this universe. And if I understand what she’s saying correctly, subatomic experiments such as CERN have had something to do with it. Interestingly, there’s credible science to go along with this theory.

Debra‘s article instantly reminded me of one of my favorite movies of all time, “Donnie Darko“, released in 2001. In that film, an event happened which caused a rift, or splitting off from the primary universe to a tangential one. And a specific task had to be undertaken to collapse the tangential universe and return it to the primary.

The various events that occurred in the tangential universe —which was very unstable and had a limited shelflife — included great revealings such as theme of false spiritual teachers being exposed; a child pornography operation being exposed and it’s operator going to jail; those working with in the system being censored and fired for speaking truth; the subversive nature of a 2D “love vs fear” paradigm, and more.

I find it interesting that this incredibly well-crafted movie was released in 2001, the same year that it increasingly appears a timeline shift in the very fabric of our reality was instigated by the orchestrated event of 9/11.

As I understand it, that event happened on the same day that a multi-trillion dollar scandal was going to be exposed to the world, involving the corrupted US government.

Instead, the release was covered up, and the evidence destroyed — which was physically located in files in the towers that were taken down. Or in the words of Larry Silverstein, who owned the twin towers, and had just bought a massive insurance policy, “pulled”.

Since that day, in my view the scripted events that followed have been a steady march toward totalitarianism and social insanity, for the past 21 years.

And revelations of truth and goodness are happening with just as much prevalence. However, the availability of these are not on the TV news, but rather in smaller social venues and our own inner experiences, for those of us who can be transparent enough for authenticity in this life and our relationships; and disciplined enough to close down the external for a while and go within.

If you’re having a hard time doing this, it’s OK, you’re definitely not alone. I struggle with it too, though I feel increasingly in the throes of some benevolent process which my conscious mind does not yet fully understand.

But as I write this, at 4 AM on June 2nd, and in haste to catch an early flight (forgive typos) — I have just woken up from a dream in which there was indeed a massive shift in the fabric of the universe, to an unstable one of Limited duration. Each day, the communication cord was effectively shortening, signifying the time to communicate and resolve was running out. There was also a guide, who I know in this lifetime, but his voice was different. There was a mystery to solve, and the ability to do so I was predicated upon not being held back by fear, in the face of scary beasts.

Back to waking life, here’s what I know for sure. Our individual ability to choose, is precious gift. Our intentions and prayers matter, and will keep us in the transformative process unto a beautiful outcome. There is a better way than we currently see in this broken world.

Has there been a timeline shift, or transition to a “tangent“ universe?

Is there indeed now something fundamentally flawed with this universe?

If so, where do we go from here, what what is under our control… or perhaps better said, what is accessible by our choice?

I would love to hear your thoughts on all of this… please comment below. And I invite you to watch Donnie Darko if you haven’t yet. (Look for the original directors cut — it’s hard to find, but worth it.)