Winning against energy mafia: BC Hydro executives lose the plot… and their conscience

31 comments
Josh del Sol
275 views
31 comments
By Josh del Sol -- People know me as being very positive on the whole about the way things are going, in our movement and in the big picture. And this is true... But I can't help feeling discouraged by how lost British Columbia has become -- or should I say, how lost those who run BRITISH COLUMBIA, the for-profit corporation masquerading as government, have become.

by Josh del Sol, director and producer, Take Back Your Power

People know me as being very positive on the whole about the way things are going, in our movement and in the big picture.  And this is true.  I have a sense for the collective process of moving through the fear, speaking truth to power, and enforcing liability.  A path of waking up which is currently being walked by a solid percentage of humanity.

But I can’t help feeling discouraged by how lost British Columbia has become — or should I say, how lost those who run BRITISH COLUMBIA, the for-profit corporation masquerading as government, have become.

It appears the management in my home province has now completed its descent into the slimy waiting hands of mafioso.  And BC Hydro is all-in, now autocratically committing crimes against everyone in the province.  More on that below.

A couple of weeks ago, BC Hydro very publicly cut electricity to the home of Rotraut Knopp, an elderly old Cowichan woman, who has — like tens of thousands of others in BC — been faithfully paying for their electric service but refusing to pay into the extortive “Legacy Choices Program”.

“I have something about forcing people,” said Knopp.  “It’s just because my history in Germany; everybody knows that history. Force, encourage, it’s just something I have something against. It just rubs me the wrong way,” she said holding back tears. (link)

Rotraut Knopp was born in Germany under Hitler’s reign.  She is among a select group of elders still alive who don’t need history books to say what fascism is like, or how such “corporate collectivism” invariably ends up creating the worst nightmares of human history. 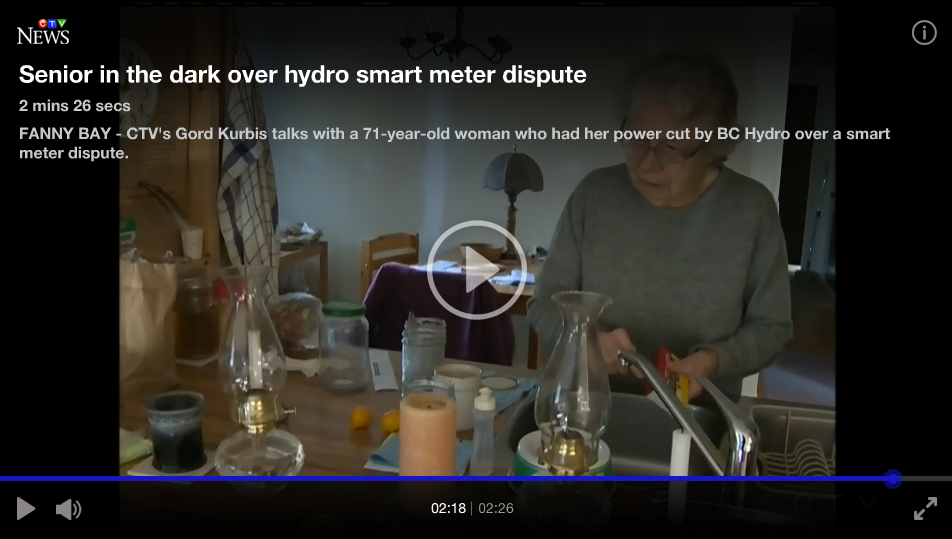 Reality check: what this means

BC Hydro says that unless you pay $100 up front and $32.40 every month, they want to you to accept their ridiculously-named “smart” meter, and along with it, drastic harm to your basic human rights.  (Many other utilities are also attempting to float a punitive arrangement, to quash dissent.)

They want you to submit to an agenda to surveil you, irradiate you, skyrocket your bills toward eventual austerity, potentially cause a fire, and make your home vulnerable to hacking and eventually remote control.

What you’ve just read is textbook extortion.  And if you’re standing against it, you’re one of many thousands in BC.

And what you’ve just read is happening to everyone who lives in BC.  This is far beyond mere white-collar crime by the corporate-government complex, which has, until now, generally not been attempting to directly enroll us into a fascist police state without our consent.

But it is now happening, to a greater or lesser extent, in most regions worldwide.

Truly, until the people hold the corporate mafia members accountable and enforce their liability, the Orwellian scenario will continue to spread.

This isn’t just win-at-all-costs dirty tactics being taught throughout the energy-industry, as revealed in the New York Times two weeks ago.  Or even a car-bombing of a decentralized energy advocate in Louisiana last week.

No, with this industry con job — a desperate attempt to keep energy and power out of the hands of people — the implications go deeper.

As they have a mind to sidestep all rules, all accountability, this raises the stakes.

It may not seem like it now, but those behind this agenda want to make individual rights a thing of the past.  They want to tax you into submission to the collective, to dictate your privileges, and ultimately, to let you know when you’re no longer useful.  This is eugenics, and for a couple hundred years it has been the deadly virus of entitlement behind insane agendas of indoctrination and control — such as the “smart” grid, the way it is currently designed.

Think it couldn’t happen here?  Think again.  This is what happens when power is obtained without love present, or even welcome.

Now, a couple words of empowerment.  First, they can’t keep the lid on this thing for much longer.  Even people who have still been immersed in mainstream media are now seeing much of what’s going on.  Our work is to move ourselves and others into positive action, rather than what the control agenda wants for us: to stay in fear, cynicism and inactivity.

Let’s stay awake, get active, and remain committed to the process.  Others are coming along.

Second, finding out about all of this corruption is a necessary blessing, as this higher level of truth also contains revelations about who we are, and where our rights come from.  (Hint: It’s not government.)

I had a dream the other night, in which I wrote a comprehensive treatise on a specific subject.  A well-known natural doctor reviewed my work, and told me, “Great job… one of the best I’ve ever seen.”

However, on the other side of the paper, his blue ink cut through all layers of pretense: “BUT WHAT DO YOU CARE ABOUT?”

This shook me… even as I write these words I’m feeling the welling emotion from such a challenging, honest reflection.

Though I made a film exposing what is perhaps one of the biggest corporate scams of all-time, I still have moments when I feel hopeless, frustrated and fearful for the future.

And like all of us, I too feel the deep questions: “Are we going to make it?”, “What can we do?”, and “From where will the real solutions come?”

In the midst of this challenging time, let us remember what we really care about.  The right that we stand for… and the wrong we stand against.  What our purpose in life is.

From my perspective, I can offer this, which to me has the heart-ringing feeling like a surety:

In the midst of our great struggle to birth a better world, there are solutions coming — riding a new wave of consciousness and inspiration.  Renew your connection to what matters, to what or whom you deeply care about.  Whatever the true answer for you, honor it.

The decision you make will add to the coming wave.

Hover over each link below, for a description of each linked reference.  Do you see any parallels, or not?

Transcript of the above scene from “Judgment at Nuremburg”:

The trial conducted before this tribunal began over eight months ago.  The record of evidence is more than 10,000 pages long… and final arguments of counsel have been concluded.

Simple murders and atrocities do not constitute the gravamen of the charge in this indictment.

Rather, the charge is that of conscious participation… in a nationwide, government-organized system… of cruelty and injustice… in violation of every moral and legal principle known to all civilized nations.

The tribunal has carefully studied the record and found therein… abundant evidence to support, beyond a reasonable doubt, the charges against these defendants.

Herr Rolfe… in his very skillful defense… has asserted that there are others who must share the ultimate responsibility for what happened here in Germany.  There is truth in this.

The real complaining party at the bar in this courtroom… is civilization.

But the tribunal does say… that the men in the dock are responsible for their actions.

Men who sat in black robes… in judgment on other men.

Men who took part… in the enactment of laws and decrees… the purpose of which was the extermination of human beings.

Men who, in executive positions… actively participated in the enforcement of these laws… illegal even under German law.

Herr Rolfe… further asserts that the defendant Janning… was an extraordinary jurist… and acted in what he thought was the best interest of his country. There is truth in this also.

Janning, to be sure… is a tragic figure.  We believe he loathed the evil he did.

But compassion for the present torture of his soul… must not beget forgetfulness… of the torture and the death of millions by the government of which he was a part.

Janning’s record and his fate… illuminate the most shattering truth that has emerged from this trial.

If he and all of the other defendants had been degraded perverts… if all of the leaders of the Third Reich… had been sadistic monsters and maniacs… then these events would have no more moral significance… than an earthquake, or any other natural catastrophe.

But this trial has shown… that under a national crisis… ordinary, even able and extraordinary men… can delude themselves into the commission of crimes… so vast and heinous that they beggar the imagination.

No one who has sat through the trial can ever forget them.

Men sterilized because of political belief.

A mockery made of friendship and faith.

The murder of children.

How easily it can happen.

There are those in our own country, too… who today speak of the protection of country… of survival.

A decision must be made in the life of every nation… at the very moment when the grasp of the enemy is at its throat.

Then it seems that the only way to survive is to use the means of the enemy… to rest survival upon what is expedient, to look the other way.

The answer to that is: Survival as what?

A country isn’t a rock.  It’s not an extension of one’s self.  It’s what it stands for.

It’s what it stands for when standing for something is the most difficult.

Before the people of the world… let it now be noted… that here in our decision, this is what we stand for:

Justice, truth, and the value of a single human being.