Behind The “Green” Illusion: The Multi-Trillion Dollar Zetabyte Casino

by Care Leah, Guest Writer for Take Back Your Power

“Wireless networks use the energy in 1 pound of coal to transport 1 GB.”

Some years ago while I was in the midst of cleaning and winding two antique (analogue) mantel clocks, ten year old neighbourhood twins happened to drop by for one of their occasional visits. Each twin was apparently at a loss to comprehend what these objects were.

They watched with fascination as each clock worked its magic. As the ornate hands turned, the twins became enchanted by the complexity hidden behind each clock’s little door, the intricacy of enmeshed wheels interacting with synchronous perfection. As each clock in turn marked the passage of time by chiming each quarter hour, they each seemed smitten, mesmerized by this mysterious yet visible manifestation of the passing of time, a physical demarcation of past, present and future.

It was as if time’s relationship to time’s passage was heretofore unknown to either twin. Instead it was as if all they knew was the “now”ness of each isolated moment displayed on their watches, as if a virtual rendition of a digital snapshot of each moment of time had until now seemed to be the same thing as time itself, wherein each digital moment exists without relation to any other moment in time.

I was reminded of those seemingly digitally shaped twins as I began to read The Cloud Begins With Coal, an August 2013 document which appears to be industry sanctioned.

Despite the impression of its pro digital bias, this document nevertheless manages to succinctly bring to light certain key aspects of that industry’s short-term world view of what comprises a growing global digital addiction, reframed as “opportunity”.

The paper candidly asserts that:

“[U]nder some circumstances cloud computing can consume more energy than computing on a local PC.”

“Wireless networks use the energy in 1 pound of coal to transport 1 GB.”

The Cloud Begins With Coal, possibly more by default than by design, takes on the role of the child in the Emperor’s New Clothes. It accidentally manages to reveal the profoundly hypocritical foundation at the core of corporate green hype. What is inadvertently illustrated reveals at least one underlying motive for the smart grid’s industry message, which essentially is this: “Do as we say, not as we do.”

What is exposed is the basis for a sickly symbiotic relationship between utility corporations and willing consumers who offer themselves up as a means to keep the scheme afloat,while at the same time it takes for granted a mutually deceptive co-dependence, a corporation and consumer shared vested interest in promoting digital greenwashing ad-nauseam.

Since late in the last century, an entrenched, yet largely unquestioned viral plague has been spreading chronic digital addiction into every corner of the globe.

How has it come to this, that even once-proud Masai warriors sit idle on wilderness sandstone rocks, transfixed, drawing into their midst invisible harmful frequencies from distant cell towers? It is as if their very identity has been supplanted, reduced to staring at a miniature screen. Meanwhile, the sustenance of their relationship to nature is ignored. Each warrior appears to be succumbing to the same pervasive, digitally cultivated state of mindlessness now seen everywhere.

This picture captures the essence of what seems so dissonant in this digital age, a quintessentially false substitution for life itself, seduction by virtual unreality. It is as if the Masai become absent spirits inside thwarted lives reduced to Procrustean proportions, wherein frequencies blanket even the most remote tribal regions, shrinking awareness to fit a tiny screen sized illusion of existence able to invisibly reshape brains while shrivelling consciousness.

In unintentionally exposing the digital Big Lie, this article manages to demonstrate the vacuity of an entire headlong trend towards a single global digital economy, a world which devours vast quantities of electrical energy for frivolous empty pursuits devoid of depth.

All sources of energy, from nuclear to coal fired have become digitally dependent, and therefore eminently hackable. Hence, the thin veneer of what passes for civilization becomes potentially ever more subject to sabotage. Yet at the same time it feels as if everywhere a monoculture of thumb text-ers fiddle and tweet while Rome burns anew.

The cognitive dissonance of modernity invites people to live inside a digital bubble, oblivious to corporate over consumption of tax funded energy resources. Corporations in turn, lobby for ever greater control, like an invisible spider at the centre of an all encompassing wireless digital web.

In reality, those who are expected to fund this system have become trapped inside it, succumbing to “smart” everything, seeking an app for anything, readily outwitted by one trendy deception after another.

Before “smart” over-billing became rapacious and rampant everywhere, countless energy consumers up until then seemed all too willing to collude with corporate  gobbling of electrical power.

However, times are changing. It is becoming daily more difficult for energy junkies to avoid the real meaning of corporate orchestrated faux eco-awareness. Genuflecting toward the false virtue of a “paperless alternative” lifestyle no longer satisfies deeper human needs.

Essentially, the digital economy is based on tithing. One is told compliance is the only option. Few misanthropes stop to consider that emissions from a single volcano wipe out all carbon footprint binding, while at any given moment at least 200 volcanoes are active. Instead, carbon guilt oversees entire economies run on carbon rationing cards. Distracted by the cloud, most continue to trust fiat currency, fiat communications and fiat relationships.

Astoundingly, there are those who actually defend as “green” the radar microwaves used to run all things digital, a system designed to devour ever greater quantities of energy/electricity for one dimensional, short term ambitions, to pirate, to hoard and to trade vast sums of what is deemed to be invaluable stolen private data, investing in electricity future derivatives markets where profit margins are the only boundaries in evidence.

Entire microwaves corridors are about to be constructed at a cost of billions, in order to shave microseconds off the time it takes to complete a stock market transaction between Toronto and New York. Why? Microwaves enhance split second profits. He who sells first wins.

By the same token, warnings remain ignored that digitally driven energy by its very nature could disappear in a matter of seconds, energy which might otherwise be judiciously used in a safe and reasonable, hard wired fashion to support the most basic human need to thrive.

Instead the energy which customers are forced to conserve costs them more than ever and it is recycled and used to feed a world wide addiction to the promise of endless digital “information” (versus knowledge or wisdom). Then again, the digital train left the station long ago, destination unknown.

Hence we now see a growing demographic of oblivious, self indulgent, dysfunctionally digitalized humans who increasingly walk into traffic or fall into mall fountains, drive off docks, or die in fatal accidents while using their digits to interact with brain diminishing digital devices.

Life lived virtually is all part of a larger, invisible monitored communications system operating in tandem with paranoia and greed fuelled endless data extraction and collection via a surveillance system potentially without parameters.

Any corporate entity which readily lies about its own massive energy profligacy, in order to protect its own corporate monopolist agenda, which reframes reckless digital extravagance as the inevitable “Internet of Things”, is unlikely to have scruples when it comes to defining a captive customer base as not human but simply commodified data banks meant to serve the system.

Such hard but inescapable digital facts are a warning writ large on the crossroads which every wireless user now faces. 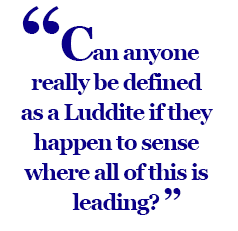 Can anyone really be defined as merely a Luddite if they happen to intuit where all of this is leading, if they resolve to fight to hang on to the autonomy afforded by any and all things analogue, if they refuse to grant consent to be violated, or to passively bear witness to the trashing of the reliable, non hackable, analogue real world, the one designed prior to the age of obsolescence, the world intended to to continue to function?

Meanwhile – better late than never, the force used to implement the smart grid has led to many waking up, becoming aware that they have become ensnared unwittingly in a corporately-defined, digitally re”mastered” post analogue world.

Those who sense that what matters is slipping away have chosen to ask themselves this: Why should this digital world be permitted to become a synthetic substitute for life itself?

What is underway is a wild rush into an unexamined virtual world predicated on the assumption of an endless supply of conventionally “sustained” electricity, most of it intended to be used to access, to operate and to collect your personal data against your will, with no thought for what happens if the supply is interrupted, hacked, or even discontinued or those thus robbed stand up and say it stops, now.

What kind of harsh overnight reality might well unfold the minute billions of digital addicts with no hands-on genuine life skills were to suddenly find themselves left in the dark with absolutely no sense of how to survive or how to order or organize the real world all around them?

How do augmented reality devices sustain the world?

What has until recently been less explored is the way in which the average semi-somnambulistic digital consumer enables this corporate push to wipe out all manner of real analogue mechanical devices and to supplant reality with a regime digitally augmented transhuman priorities.

For without the collusion of those who have become enamoured with all things digital, what hold would corporations or corporate governments really have, if they were no longer granted consent to continue the piracy game as universal private data extractors?

The virtual digital world can never live up to its own distorted hype. And the best part of that fact is this, that thousands, if not millions, are realizing that this digital trend is not some glorious oasis of cultural advancement, nor a virtual library of vast wisdom but rather, that the digital world is an illusion. It withers even as it expands, a mirage in a one dimensional, lifeless data desert.