Josh del Sol
88 views
3 min read
Add comment
With a letter to the Alberta government from Andrew Michrowski PhD, this article considers the evidence linking an increase in electrical fires/failures to accelerated corrosion from electron-stripping -- due to microwave technology and networks.

Editor’s Note: The below letter was sent to a prominent member of the Alberta provincial government (name currently withheld at request of author), addressing a very possible but overlooked cause to the recent major electrical fire and outage in Calgary, AB, Canada.  Research is linked below the letter.  -TBYP 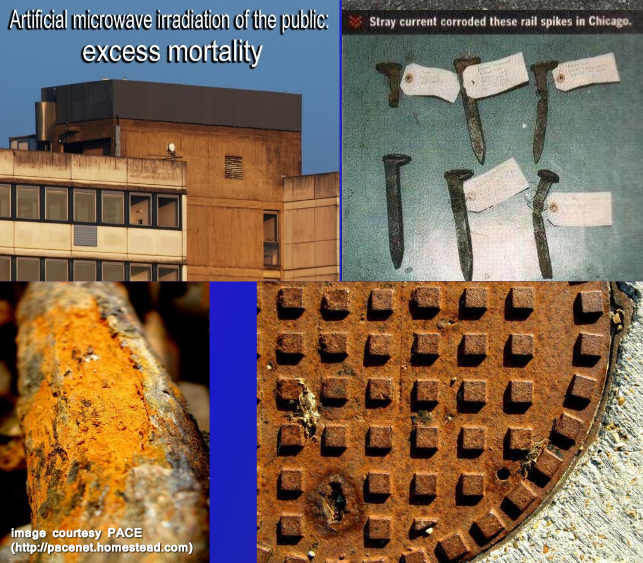 It may be worthwhile to have it checked whether a co-factor in this tragic underground facilities fire was accelerated corrosion associated with the electron stripping from the variety of infrastructure networks involved, mostly in the wireless technology frequency and higher range spectra, including the opto-electronics involving SMART meter data, computerized data, telecommunications, etc.

We have studied the question since 1995 while conducting the multi-year national electromagnetic fields in housing for Canada Mortgage and Housing Corporation (including co-work with Edmonton Power, Manitoba Hydro and BC Hydro). We also noted adverse advanced corrosion in underground infrastructure during a legal case in the Eastern Townships, and for many years now along major streets in downtown Ottawa, which have required complete overhauls in the tens of millions of dollars of re-furbishing and fixing in over ten office, hotel and condominium buildings associated with facilities similar to the case in Calgary this Thanksgiving weekend. Note that a recent report by the Ontario Fire Marshall has indicated certain technical issue aspects associated with wireless frequency technology (such as SMART meters) that may apply to Calgary.

What we could offer, as an independent collaborative of advanced scientific thinking – if accelerated corrosion is indeed a factor – is not only some suggestions for shielding, but also for proofing the infrastructure through novel protocols against repeats, some of which have been developed in Alberta, but which may require further research and testing for their applicability for Calgary-type situations.

We are copying various Alberta associates, et alia, who might be able to be helpful in this regard. We are apprehensive that this incident may be precursor to others worldwide, in view of widespread popularity of wireless technology and the insatiable demand for more and more data capture and monitoring.

Attached are some documents associated with the issue of inquiry.  Note that to identify of accelerated corrosion co-factor, investigators should be able to ascertain (even with microscopy) that it occurs faster than normal oxidation, such as rust, and provide the usual chemical layer of protection, that there are many punctures, the coloring differs, that there is abnormal shrinkage – from the electron stripping – at surfaces.  The proofing would stop the puncturing associated with electron stripping from emissions in the higher frequencies including opto-electronic fixtures.

Andrew Michrowski PhD lectures at professional societies and provides workshops on EMF-related issues. He led the study team on EMF research for Canada Mortgage and Housing Corporation. Andrew has drafted consumer reports, safe housing guidelines and for UN briefs in Geneva, has been a legal expert witness & assessment reports, and is the co-founder of The Planetary Association for Clean Energy (PACE).