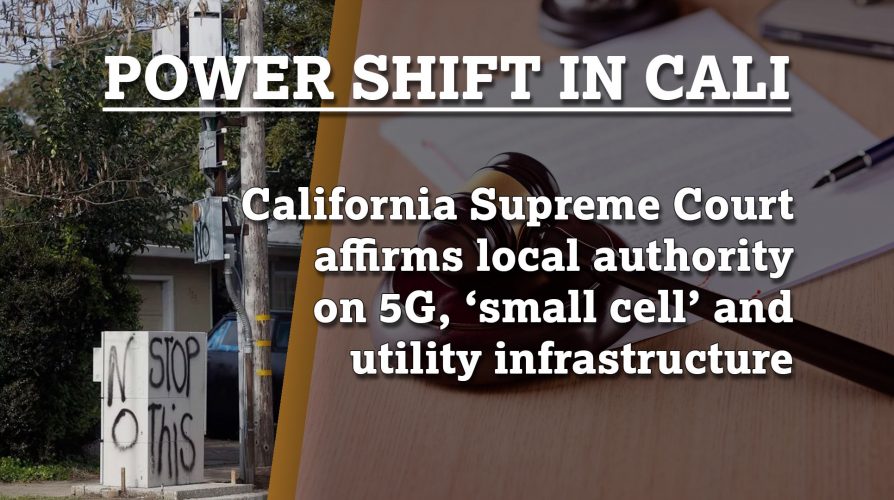 7 comments
TBYP Staff
5,353 views
7 comments
This breaking development recognizes the shift of power toward local governments, and away from the 5G corporate oligarchy operating through the FCC.

On April 4, 2019, the California Supreme Court published an opinion supporting municipal authority to make regulations on so-called ‘small cell’ PROW (public right of way, aka ROW) towers and uses of the public’s right-of-way. This opinion affirms the 2016 appellate court ruling.

This opinion seems to go far beyond mere aesthetic standards — the focus of the lawsuit by T-Mobile West LLC — affirming the exercise of municipalities’ full police powers to regulate small cell towers in the public’s right of way, including that municipalities do have discretionary power.

These rulings have bearing on Smart Meters in California because of the affirmation of local policing powers. The Supreme Court and appellate court decisions repudiate CPUC claims of exclusive jurisdiction over utilities made during the Smart Meter roll-out.

An amicus brief was filed May 11, 2017 on behalf of the League of California Cities, California State Association of Counties, the International Municipal Lawyers Association, and SCAN NATOA, Inc. written by Jeffrey T. Melching and Ajit Singh Thind of Rutan and Tucker, LLP with valuable additional information.

These decisions give cities and counties the backbone and legal cover to create and enforce rules and ordinances to protect the public, the environment, and public land. These decisions are vital documents for local officials and decision-makers. Hopefully as well, they will provide support for actions in other states and countries.

Much of the discussion in the Court’s opinion focused on California Public Utilities Code 7901 and 7901.1, the broad definition of the word “incommode” in that section, and the Constitutionally-granted policing powers and “powers of control” of municipalities.

Contrary to plaintiffs’ argument, the incommode clause need not be read so narrowly. As the Court of Appeal noted, the word “incommode” means “to give inconvenience or distress to : disturb.”

But travel is not the sole use of public roads; other uses may be incommoded beyond the obstruction of travel. (T-Mobile West, at pp. 355-356.) For example, lines or equipment might generate noise, cause negative health consequences, or create safety concerns. All these impacts could disturb public road use, or disturb its quiet enjoyment.