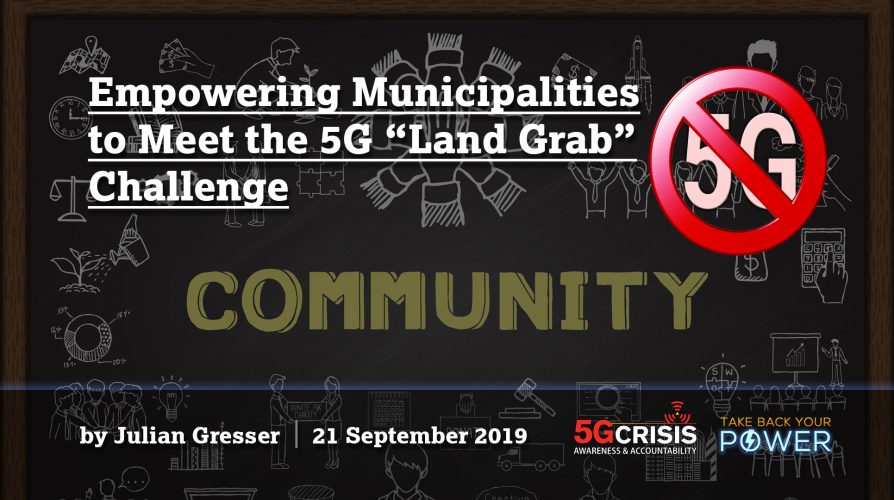 [Disclaimer: For informational and educational purposes; personal opinion of the author; not to be construed as legal advice.]

Many municipalities are capitulating in negotiations with wireless companies when they are threatened or sued for wishing to protect their citizens from the harms of 5G EMF irradiation. Mayors and city councils across this country are convinced they do not have a right to say “no” to the dense cell towers and antennas being erected in public rights-of-way.

What if in fact they have viable options? How can municipalities in the U.S. negotiate more effectively and level the playing field, taking optimal advantage of federal and state law?

A favored tactic now being deployed by the FCC and industry promoters of 5G is to attack the Mind by establishing false and invalid Assumptions. This tactic engenders fear, desperation, despair, resignation, and, most tragically, loss of hope. It is designed to squander municipalities’ time and preciously scarce funds, and sap vital and creative energy. The antidote for mayors, city councils, and citizens is to cultivate integrity and resilience, and bring the power, wisdom, and intelligence of Heart and Mind effectively together (“Big Heart Intelligence”).

In fact, all three assumptions are highly questionable.

There is a reasonable chance that the authorizing provisions of the 1996 Telecommunications Act, and the overreaching FCC rules implementing them, will be held unconstitutional, in violation of home rule, separation of powers, due process, and uncompensated taking, under the 1st, 5th and 14th Amendments to the Constitution. The U.S. Supreme Court has already recognized the principle of “cooperative federalism,” which will counterbalance the FCC’s aggressive use of the preemption doctrine.[i] The California Supreme Court in T-Mobile v. City and County of San Francisco has also confirmed the fundamental right of local municipalities to protect the health and safety of their citizens.[ii] On August 9, 2019 the D.C. Circuit ruled that the FCC 5G Program must conform with the basic provisions of the National Environmental Policy Act (NEPA).[iii] And there are various federal laws protecting the public from false and misleading advertising, such as touting the benefits of 5G without warning of its attendant harms.

There is significant scientific evidence that EMFs associated with 3G and 4G wireless technologies are closely linked with cancer, damage to mitochondria and DNA, neurodegenerative illnesses, and cardiac disease, with significant data also on hazards to children, pregnant women, elderly persons, and people with special sensitivities and disabilities. In 2018, a National Toxicology Report on Cancer recognized that EMFs are the cause of malignant schwannomas in rats.[iv] Less well appreciated is the fact that 5G implementation is a form of government and industry enforced national addiction to faster and faster internet speeds that may encourage opioid addiction, mental disease, and violence–all associated with sympathetic overdrive of the autonomic nervous system for large segments of the population.

Australian barrister, Raymond Broomhall, has implemented a powerful protocol based on the Precautionary Principle with great success. [Approximately 2,500 4G/5G cell sites have been halted in Australia. -Ed.] I believe this same protocol has a good chance of being adopted and applied in the U.S., if similarly effective alliances can be forged between citizens, attending physicians, and attorneys, as is currently happening in Australia. Under Barrister Broomhall’s Precautionary Rule– which I am calling the “Principle of Heightened Vigilance”[v]–and basic tort principles of foreseeability and duty of care, I predict that mayors and city councils in the U.S. may face civil, and even criminal, liabilities for assault and related illegal activity. Mr. Broomhall’s protocol is elegantly straightforward:

a) Document, organize, measure, collate, and publish all data on EMF exposures and harms.

b) Secure an Advisory Letter from an attending physician confirming the patient’s own concerns and wishes not to be irradiated from a medical perspective (establishing a physician-patient confidentiality relationship).

c) Present a well-reasoned and documented Letter of Objection and Warning from a licensed attorney, creating a record that the patient refuses to consent to be irradiated, deeming a dismissal or ignoring of such Objection/Warning to be confirmation of an intent to assault. Similar to Australian law, the California Penal Code explicitly imposes strict criminal liabilities on those who assault children, elderly citizens, and people with special disabilities. As 5G towers are planned on public spaces, municipal authorities and those immediately responsible will be become primary actors, enablers, and accessories of the foreseeable harms alleged.

Mayors and city council members should ask, “How can I protect the citizens of my community?” What do I really want? If the answer is to say ‘No’ to the 5G rollout, then the following actions should be considered under the Principle of Heightened Vigilance outlined above:

There is a viable and safer alternative to a ubiquitous wireless juggernaut. It is a predominantly wired/fiber optic infrastructure, which was nationally funded over a decade ago. A wired internet has significant advantages over wireless, in that it is more reliable, more secure from hacking, more energy efficient, faster, and essentially radiation-free. It has been shown that communities implementing a wired/fiber alternative not only realize a positive return on investment, but will also have a strategic economic advantage over wireless.[vi] “SafeG” communities will attract superior companies that are concerned with the health of their employees and the environment, and such companies will create local jobs and catalyze innovation. Of course, wireless can play an important role in these communities as well, because the public demands mobile devices. But at least the implementation of the wireless option can proceed with care, balance, and compassion and with the health and wellbeing of local communities as a top priority.

[i] The United States Supreme Court described the way that Congress intended the Telecommunications Act of 1996 to operate: “Congress ultimately rejected the national approach and substituted a system based on cooperative federalism… State and local authorities would remain free to make siting decisions. They would do so, however, subject to minimum federal standards—both substantive and procedural–as well as federal judicial review.” (US Supreme Court 544 U.S. 113 (2005), 03-1601, City of Rancho Palos Verdes v. Abrams. See also TCA 332(c)7, and TCA section 255).

[ii] On April 4, 2019 the California Supreme Court handed down a unanimous decision in T-Mobile v. City and County of San Francisco upholding the San Francisco ordinance requiring telecommunications companies to get permits before placing antennas on city infrastructure. Note in particular that the Court affirmed that “inherent local police power includes broad authority to determine, for purposes of the public health, safety, and welfare, the appropriate uses of land within a local jurisdiction’s borders” (pg. 5) and “…lines or equipment might generate noise, cause negative health consequences, or create safety concerns. All these impacts could disturb public road use, or disturb its quiet enjoyment” (pg. 9).

[v] A leading Japanese precedent applicable to Civil Code jurisdictions is the decision of the Yokkaiichi Court that recognized the individual liabilities of six petrochemical facilities for the bronchial illnesses of residents of the Yokkaiichi Village in Japan. The Court ruled that the burden of proof shifted when plaintiffs were able to show the: a) origin of the toxic substance, here NOx, Sox; b) the pathway of transmission; and c) the point of entry (lungs and skin), supported by clinical, experimental, and epidemiological evidence. See Julian Gresser, Koiichiro Fujikura, Akio Morishima, Environmental Law in Japan (MIT Press 1981). A seminal California court decision on multiple sources of pollution is Sommers v. Tice.

Julian Gresser is a licensed California attorney, and currently Chairman/CEO of Big Heart Technologies, Inc., a California Benefit Corporation. He was twice Mitsubishi Visiting Professor at the Harvard Law School and was Chairman of the Japan Industrial Policy Group in the U.S. State Department during the Carter Administration, an interagency task which developed a national industrial policy in effective collaboration with the semiconductor industry. His online course, The Resilient Negotiator—Meeting the 5G Network Challenge, is available at: https://resiliencemultiplier.com/5g-trn/