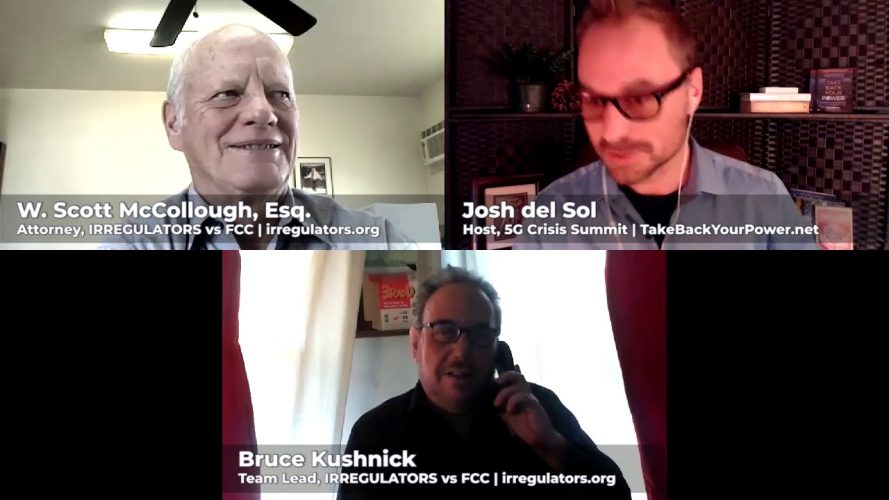 79 comments
Josh del Sol
52,309 views
79 comments Subscribe
Watch this groundbreaking conversation with the IRREGULATORS embedded above or on YouTube here. This may be the most significant development since our 5G Crisis Summit, to redirect 5G in the United States. After you watch, please consider a contribution to the IRREGULATORS' grassroots funding campaign. -Josh del Sol

Bruce Kushnick and W. Scott McCollough, Esq are good ‘ol boys who have seen it all. Now they’re coming back to take a stand for freedom.

They’re also leading experts in the telecom industry who have mapped a pathway to restore the Internet to the human-friendly, benevolent ideals from which it started. As part of this redirection, they’re not afraid to call out the corruption of those who have hijacked it.

Bruce and Scott lead the IRREGULATORS, a group of telecom industry experts and insiders who are taking the FCC to federal court in January 2020, armed with evidence — of an estimated $1 Trillion scandal — and strategy that could very well pave the way to a great restructuring of telecom and dissolution of the 5G agenda.

A Powerful Case: In Summary

Bruce Kushnick is a career telecom analyst who helped invent things like call display and the first 3-digit services. Bruce has also been creating music and playing the piano for 63 years, including live performances at Carnegie Recital Hall. He’s entertaining, iconoclastic, barely sleeps and regularly meditates in his Brooklyn apartment.

On the front lines for decades, Bruce has compiled an epic, 581-page tome called “The Book of Broken Promises: $400 Billion Scandal and Free the Net,” which he is now generously offering for free. (Download this powerful eBook FREE via the sidebar on right, or at irregulators.org.)

After the interview, Bruce conveyed that many of their team of 11 experts have 30+ years of experience in the telecom industry. He sees their group in the mould of “The Seven Samurai”: highly-trained experts who have come together to join one last battle, quite possibly to save the Internet — and our freedom — in the United States.

Scott McCollough is a career telecom legal expert, and former Assistant Texas Attorney General and Contract Consumer Advocate. Reminding me of “Red” from That 70s Show, Scott is a lovable Texan hardass with a big heart underneath. He also happens to know the legal side of telecom and utilities better than virtually anyone else in the nation.

In the highlights compiled in the first 3 minutes of the interview, Scott outlined some key points in this scandal involving misappropriated funds which he estimates now totals a shocking $1 Trillion over the last 16 years:

“We had a bait and switch. We paid for a bunch of fiber to the home, and now we’re getting 5G instead.”

“We started this accounting thing not because we wanted to kill 5G, but because it was the right thing to do, once we figured out how badly local and intra-state wireline ratepayers were getting screwed.”

In the interview, Bruce Kushnick reveals how they have obtained financial documents from Verizon NY — which has previously been quietly designated as New York’s official telecom utility — that clearly show several billion dollars per year in misappropriation and theft.

Scott estimates the amount of funds that wireless giants are stealing from wireline ratepayers to be $60 Billion per year, and sees this as a cash cow that has illegally funded 5G deployments.

“[The IRREGULATORS’ suit] is a knife in the heart of the underlying economics that currently drive 5G.

“If we are successful… 5G cannot sustain itself on an economic basis if it has to pay its own way.”

We’re told that courts have been stripped of their ability to administer justice. However, as evidence for realistic optimism, Scott cited two recent wins against the FCC in the D.C. Circuit Court:

“I’m confident we’ll get a fair hearing from the court. The D.C. Circuit has demonstrated an absolute willingness to bring the [Federal Communications] Commission to heel, when it’s appropriate to do so. And it has done so twice in just the last 6 months.

In correspondence following the interview, Scott summarized these two wins:

“This was the D.C. Circuit’s reversal and vacatur of the FCC’s decision to completely excuse small cell deployments from environmental and historic-preservation review. The court held FCC did not adequately address possible harms of deregulation and benefits of environmental and historic-preservation review. As a result, small cell deployments must go through the NEPA and NHPA ‘review’ process to determine if further study or analysis is required before site approval.“

“This was the D.C. Circuit’s disposition of the FCC’s 2018 decision to reverse the prior majority’s decision to impose “net neutrality” on broadband Internet access by applying “Title II” common carrier regulation. The court generally affirmed the FCC’s decision for interstate purposes, but vacated the FCC’s effort to expressly and in advance preempt “any state or local requirements that are inconsistent with [FCC’s] deregulatory approach.” 940 F.3d 1, 74-86.”

“Both of these decisions limited FCC’s ability to completely preempt any state or local regulation or action over Internet and wireless service and effectively gave some power back to states or local authorities.

“Our case is the third leg of the stool. It would also allow state commissions to decide whether to end the current massive wireline-wireless subsidies going to CMRS [Commercial Mobile Radio Service] in general and small cell in particular.”

Throughout the interview, Bruce illustrates a plan for state and local governments to take back their networks, by:

Bruce then shares about the years of groundwork they’ve laid which now lead to the culmination of their IRREGULATORS suit:

“It’s funny because 5G has woken people up. Scott and I have been doing this a very long time. Sometimes we’d have conversations with one person showing up, saying, ‘Well that’s an exciting idea!’ And now, you’ve got all these people going, ‘I don’t want that outside my house!’

“I want to win. The one thing most people don’t understand is what it takes to win….. What are the companies doing towards us? And what do we have to do to defend ourselves?

“Can we actually restructure things? This case is the beginning of that restructuring, I think.”

Scott sums up a key opportunity area: how we can educate, inspire and team with our local officials to win the battle.

“Getting folks in the local communities to start exhorting their state and local officials to educate themselves about what it is they can do! There are many things they can still do.

“All these officials hear, though, is news coming down from the top, and from the feds, and from industry, [saying], ‘There is nothing you can do. Your hands are tied. We have tied your hands.’

“Well your hands are not tied. I mean, there may be a piece of string around one of your fingers. Yes, you have a finger that is tied — but you’ve still got nine other fingers!”

“They [local officials] may not be able to stop the tower… but they can stop the fiber that goes to the tower.”

In creating the campaign as we come together with community and elected officials, Scott identifies the need and responsibility that we the people have, to go beyond “just being against 5G” and to include the solution:

“We’ve got to give them an alternative. Fiber to the home on an open, interoperable Net Neutrality network. Preferably one that’s community owned.”

I believe the IRREGULATORS vs. FCC initiative is great opportunity for positive change. But in order for this case to happen and be successful, they need our support.

On behalf of the 5G Crisis Summit initiative and community, please take a moment to internally check in, and consider a financial contribution to their campaign. Then, please go to irregulators.org and give according to your means. 100% of the proceeds will go to their team.

If we blow them away with our support (which we can do with your help!), they will allocate any extra funding for future legal and strategic initiatives. As one idea of a shared next step, toward the end of the video interview we discuss an in-person community & leader conference, at which a meta strategy for organized implementation will be built out.