8 comments
Brian
244 views
8 comments
By now, everyone who has been paying attention has realized that within our broken socio-political system, virtually every decision from top to bottom is based on money, corruption and greed. The 3-part presentation below, filmed in British Columbia in April 2016, will help us all see what's really going on at a deeper level. 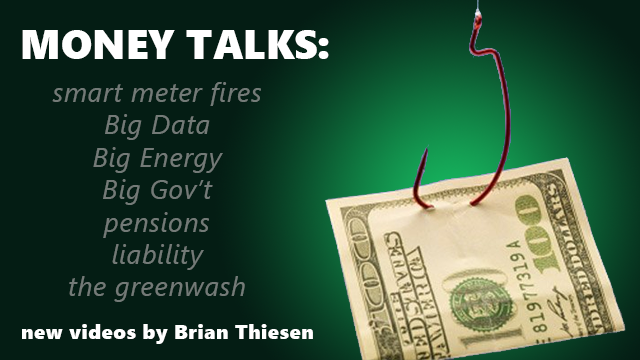 The greenwash bait-and-switch: how deep does it go?

By now, everyone who has been paying attention has realized that within our broken socio-political system, virtually every decision from top to bottom is based on money, corruption and greed.

The 3-part presentation below, filmed in British Columbia in April 2016, will help us all see what’s really going on at a deeper level. I will uncover:

Our starting point on this journey is the widespread problem of ‘smart’ meter fires – an important precursor for what follows. You will see forensically why they cause fires and explosions (thousands to date), then financially why the collateral damage they cause is considered to be “worth the risk.” Hint: ‘smart’ meters are a keystone in the Big Data pyramid…

The insane drive of Big Data is being propelled by the energy industry. Within the popular paradigm, all eyes are on Big Oil as the “bad guys” in an environmental context. Certainly they are not doing the planet any good. But by keeping us within this narrow focus without deeper thought, they have a nice distraction for the world’s largest energy companies to move in on their data/carbon/currency endgame.

This is where the pieces will connect, and it will all simply make sense. The the biggest root of all evil is not money itself, but how the people behind these agendas are after our money (and support of their agendas) for their insane ends.

So the next time you hear a politician talk about “climate”, you will have the keys to see how this all connects. And you will realize on this issue, like virtually everything else, they are probably lying.

“One has to free oneself from the illusion that international climate policy is environmental policy.  Instead, climate change policy is about how we redistribute de facto the world’s wealth…”
-IPCC official Ottmar Edenhofer, in November 2010 (link)

“No matter if the science of global warming is all phony…climate change [provides] the greatest opportunity to bring about justice and equality in the world.”
-Christine Stewart, frmr Canadian Minister of Environment, Calgary Herald, 14 Dec 1998

Further reading after watching the videos: