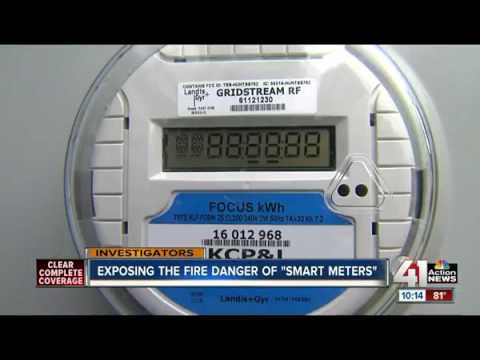 12 comments
Josh del Sol
703 views
12 comments Subscribe
From KSBH-TV: "WATCH: It's a potential hazard for almost every home in Kansas City. It can burst into flames and even explode. A 41 Action News investigation into the hidden dangers of smart meters."

KANSAS CITY, Mo. – Nearly every home and business in the metro have one.

Kansas City Power & Light is at the tail end of a two and a half year project to install more than 700,000 smart meters across the metro.

It’s a small part of the billions of dollars utilities have invested in smart meters across the U.S.

But there are serious concerns Waverly Galbreath experienced firsthand. The burn marks are visible on his KCMO home.

A burned-out circuit board is the only remaining part of the smart meter at Galbreath’s home where the July fire started.

Galbreath wasn’t at home when it started.

“I got a call from my neighbor and he said my house was on fire. But when I arrived, I found out the meter had exploded,” he said.

A KCP&L spokeswoman said the utility is investigating the fire, but she said this type of issue in the metro is very rare.

KCP&L Vice President Chuck Caisley said in a statement to the 41 Action News Investigators, “Out of the more than 700,000 meters KCP&L has installed, we are only aware of a handful of meter malfunctions.”

There are multiple smart meter makers and different models.

The company KCP&L uses has had past issues in other places.

Despite few problems in the metro, hundreds of thousands of smart meters have been recalled in the last several years across North America.

And hundreds of fires have broken out in California, Texas, Florida, Nevada, Illinois and across Canada.

“It really is a very dangerous issue and should be treated as a real unprecedented emergency in your area,” said Canadian electrician Professor Curtis Bennett.

Bennett is in an ongoing Canadian legal battle over smart meters.

“Now you’ve got this plastic piece of junk on their property and that’s actually what’s burning inside that meter base with the wires,” he said.

But Caisley said KCP&L has had a total of six problems out of more than 700,000 meters.

He said the utility has returned a couple meters which have overheated to its supplier.

Of the dozens of smart meter fires he’s investigated, he said overheating is the major issue.

“They are sparking, they are manufacturing too much heat,” he said. “In any given situation when you have too much heat and you have material to burn, meaning unfortunately wiring in the individual’s home or business, you’re going to have a fire.”

The old ones with the dials, called analog meters, only recorded electricity usage, requiring a meter reader to get the information.

Smart meters transmit your usage information to the power company.

Lambe said those transmissions can cause overheating.

This is explained in a video about smart meter fires.

“These fires are going to continue to happen because again, the basic laws of electricity are being violated,” the video says.

But KCP&L’s statement said, “At this point, we have found nothing that leads us to believe there is a problem or safety issue with the new meters.”

Galbreath has a different take.

He was without power for over a month after his home’s smart meter fire. He said he’s lucky the wood-shingled home didn’t go up in flames.

When asked if other metro residents should be concerned about smart meters he said, “I think so, I really do.”

KCP&L said the type of smart meters they’re using have not been recalled.

The utility’s statement also said the vast majority of house fires are caused by factors other than meters like outdated and overloaded wiring.

Bennett told the 41 Action News Investigators smart meter connections to old bases and faulty wiring are a serious part of the fire problem.

A spokesman for the Board of Public Utilities, BPU, said that utility has installed 70,000 smart meters in Wyandotte County.

BPU spokesman David Mehlhaff said there have been no reports of smart meter fires there.

To check on your own meter, Lambe said the best way is to feel your meter at the end of the day when it’s cool outside.

He said if it’s hot to the touch, call your utility company.

Notice: This article is mirrored here for the purposes of legacy availability. This media is for educational purposes and contains material pursuant to fair use doctrine, as recognized in [Title 17 of U.S.C., Section 107].