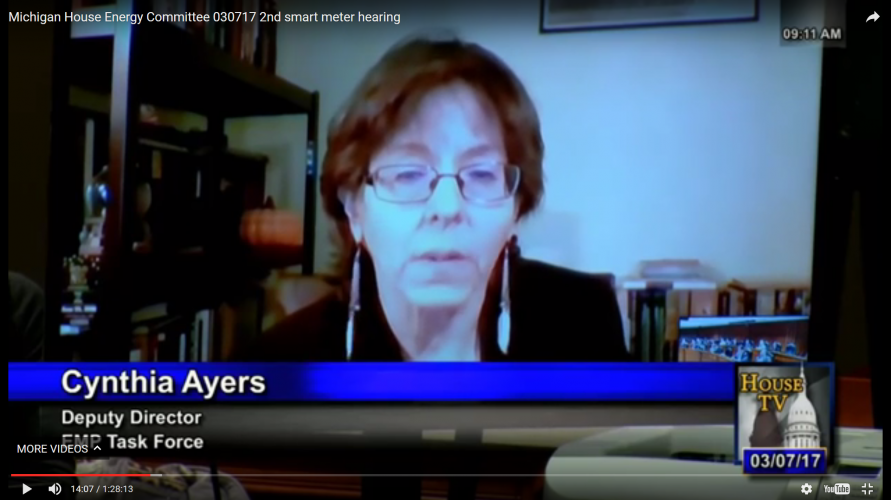 Her hard-hitting testimony opened a Michigan Energy Policy Committee meeting to review a House bill proposing a free opt-out to an analog meter, for utility customers throughout Michigan.

House Bill 4220 has bipartisan support, with Chairman Gary Glenn as primary. The interests of utility customers and those of industry seem inevitably set on a collision course.

Ms. Ayers is a former NSA employee of almost 40 years, during which time she spent a couple of years at CIA headquarters working in counter-terrorism, followed by almost nine years at the US Army War College teaching senior officers sub-warfare and military applications of artificial intelligence. Since retiring in 2011, she’s become more involved in critical infrastructure issues. In addition, she’s a consultant for the US Army War College, working on electives for cyber warfare.

Her compelling testimony focused on the strong potential for catastrophic cyber attack to the nation’s electrical grid due to the deployment of ‘smart’ meter technology. Since we, as a nation, depend on this network system for electricity to support our everyday life, her insights were invaluable.

“The so-called ‘smart’ meters are essentially digital back doors. Hackers are seeking to deploy all avenues of entry into the grid to disrupt, degrade and destroy computers – anything that’s attached to the Internet.”

“They can tell when people are home, who is there, where they are in the home and sometimes even can tell what people are up to…. Anyone who’s worked counter or anti-terrorism issues can immediately see the implications of that issue. The severity of this can involve any sort of ubiquitous usage of IoT and Smart Grid technology. It can, with a coordinated effort against a country’s leadership, provide access to families within their own homes to the extent where, unfortunately, representatives of nation states or terrorists could use targeted technology for assassinations or kidnappings.”

Ms. Ayers confirmed that there are no surge protectors in smart meters like those found in analog meters. She said that this is a particularly critical issue during heavy hits to the system.

[Mass outage issues may arise] “when heavy surges occur – bigger than normal daily surges – from events like an attack against our nation, such as a high-altitude nuclear explosion, or from more natural cases such as storms like solar flares, coronal mass ejection (CME) from the sun.”

When asked about whether surge protectors were going to be put in place, she responded:

“There is some technology that can handle it, but it’s not deployed and certainly not deployed with ‘smart’ meters.”

She used the example of a solar storm like the worst one on record, the 1859 Carrington Event  to explain that were an event like that to occur today, it would have taken down electric grids all over the world and resulted in a massive number of fires:

“The more smart meters that are installed, the more likely the event of more fires in the event of either one of these occurrences.”

“The 2008 EMP Congressional Commissions Report stated that firestorms are considered a real possibility, especially in times of drought. The electric grid is our center of gravity. It is the center of all power and movement on which all life depends. It’s the source of our strength. An attack on our center of gravity is intentional. It’s meant to take the enemy out completely, instantaneously and long-term, if possible. Being without the grid for any length of time would mean no water, food, transportation, social order and ultimately, death.”

We think it’s particularly significant that when a legislator asked, “Can analog meters be hacked?”, she responded, “No, not to my knowledge.”

A few questions were taken from legislators, including one asking if she was including laptops and cell phones as also being vulnerable to back-door entry for cyber attack. Ms. Ayers said that it would depend what they’re hooked up to, but confirmed that there would need to be a ‘smart’ meter to provide access to the grid.

So, what are your thoughts after considering this compelling testimony? I don’t know about you, but personally I’d rather believe it was all just a synopsis of a hypothetical screenplay – a Tom Clancyesque, technically detailed story of espionage & military science.

There are many positive indications that the ‘smart’ meter agenda will be stopped and reversed. It is simply harmful, dangerous and unlawful technology — and people are catching on.

We call on people in every state, province and nation to continue to oppose the deployment of ‘smart’ utility meters, and share the film Take Back Your Power and other resources to spread awareness and empowerment.