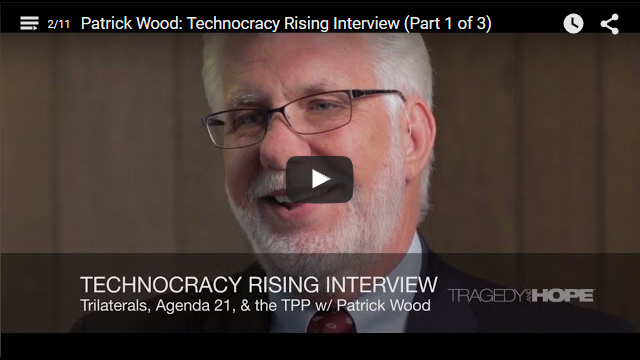 This interview has everything to do with the so-named ‘smart’ grid, the global metering agenda, the history behind it, and where this is all going if we do not change course.

The information and context which Wood expertly presents here cannot be easily dismissed. We encourage all who want to solve the root of the problems we face, to watch and share this important piece.

Patrick Wood, author of the seminal book Technocracy Rising, has been researching geopolitics and the Trilateral Commission for the past 40 years.

In part 2, Wood talks about the current shift to a ‘new economic order’: a feudal economy based on carbon credits. He states that similarly to a cap on our daily ATM cash withdrawls, one could easily surmise how, for example, travel could be restricted to only those who have behaved in a way that is deemed to be acceptable.

In such an economic ‘order’, even the privilege to have access to electricity would also be subject to our good behavior. (And so-named ‘smart’ meters come handily pre-built with remote disconnect abilities, making it super-easy for tyrants.) We are already seeing this exact paradigm at work, with several utilities disconnecting some customers, even as winter approaches — repeated acts of criminal negligence. Example: DTE disconnected this 92-year old woman yesterday because she does not want a meter designed to surveil and emit pulsed radiation.

Later in part 2, Wood then outlines the threat that technocracy poses to civilization itself:

“If technocracy wins this battle, and they implement it on a global basis, it will again take at hundreds of years before the concept of freedom and liberty liberty will surface again.”

“Once they get control of the economic mechanism, they will have control over virtually life itself. And they will be able to make the people of the world dance like puppets on a string.”

In part 3, Wood speaks on the necessity of taking action at this time in history:

“They’re 3 to 5 years away now, from having the processing power, to analyze that [surveillance] data, to tell them what it means. Then we’re in trouble. We’re in big trouble.

“In Miami, just this last week, they’re implementing a ‘pre-crime’ division. Think in terms of the movie Minority Report. This is scary stuff.”

Wood was then asked what’s the most important thing people need to grasp right now:

“It’s who the enemy is. Americans and patriots and people struggling against this whole thing for decades, I believe have had their ladder leaning up against the wrong wall. I certainly did for a long time.”

“The great Chinese military philosopher Sun Tzu said, ‘If you don’t know the enemy you cannot possibly win the war.’ We’ve been trying to win the war for 40 years, and we’ve lost – we’re worse off today.”

“We need to see the enemy for who he really is. And then and only then can we make a target out of it, to push these people out of influence in our country.”

I spoke with filmmaker and history educator Richard Grove of Tragedy and Hope earlier this week. He shared his perspective on the significance of the metering agenda within the bigger picture:

“The so-called ‘smart’ grid, meters and devices of the 21st century are to Americans, what the Gulag Archipelago was to the Soviets of the 20th Century. The fact that most Americans don’t know what the Gulag was, is the reason why there’s a technocratic surveillance system being thus far successfully rolled out.

“Those who have opposed the ‘smart’ meter rollouts are among the most-aware and resistant to the trend of Technocracy as a means of surveillance and control over individuals.”

If you find the video interview to be informative and valuable to your understanding, Tragedy and Hope creates commercial-free educational videos, documentary films, and a podcast curriculum to embolden individual liberty and overall freedom. T&H has an online research community, and is funded by individuals like you, who value their time and appreciate the organization of information, so we can all learn to think for ourselves.

The work of Tragedy and Hope is funded by memberships. Subscribe at:
http://www.tragedyandhope.com/subscribe