As reported in late July, following a series of fires throughout Saskatchewan, Canada, “SaskPower ordered to remove all 105,000 smart meters in the province.”

On October 27th, the Government of Saskatchewan released the results of a scathing review on the smart meter “debacle” which is now commonly being referred to as a “catastrophe.”  The  report concluded that “customer safety was not given enough priority.”

SaskPower CEO Robert Watson resigned his position immediately following the release of the report on the smart meter program.

Findings from the investigation

According to the government’s review:

“The primary issue of catastrophic meter failures which prompted the AMI program to be halted was not identified as an initial program risk.  When additional information about smart meter fires from other sources came to light, the risk of catastrophic meter failures did not prompt an independent reevaluation of the risk related to Sensus smart meters.”

Jack Ritenburg, an electrical engineer and head of Ritenburg & Associates concluded that moisture and contaminants inside the meters was the cause of the smart meter fires.  He also concluded that “water intrusion due to holes in meter boxes, ‘hot socket’ conditions in the meter box and over voltage in the distribution system” or other “external factors” were not the cause of the fires as previously claimed by the manufacturer:

According to the independent fire investigation report:

“Hot socket issues have been flagged as a possible reason for some of the meter failures. … [W]e feel that a hot socket condition resulting in a destructive meter failure and fire are not likely.”

“Sensus has claimed that some of the smart meter fires were caused by utility over-voltage. … We have not found any evidence to support that a significant over-voltage occurred and resulted in a destructive meter failure.”

The photo below shows electrical arcing inside a smart meter that was taken out of service under the category “Display Error.”  This failure is in the same location as smart meters which suffered a catastrophic failure. 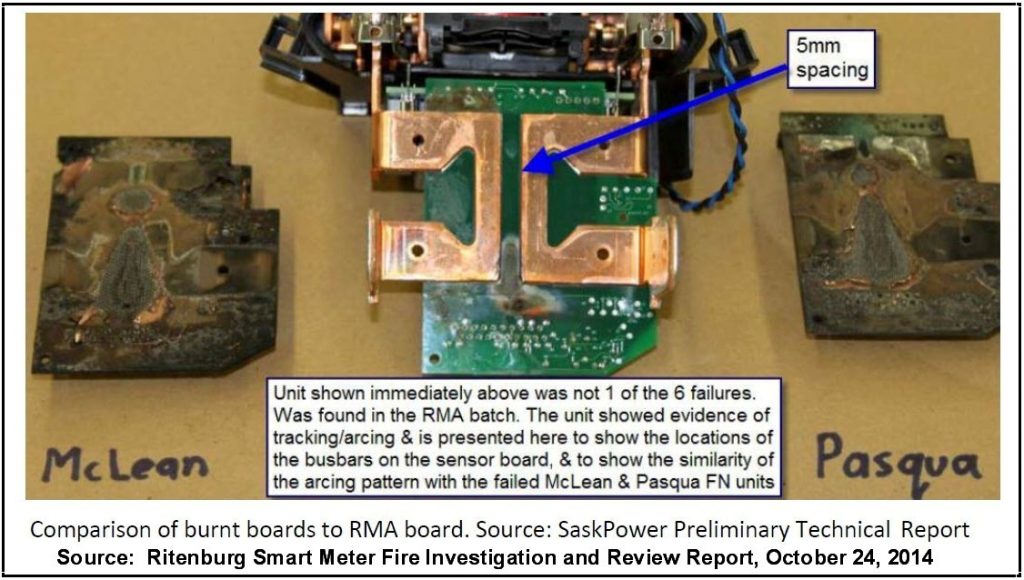 The following photo (below) shows a meter that was taken out of service by SaskPower that has staining from smoke and evidence of moisture at the bottom of the meter.  This meter had not yet suffered a catastrophic failure.

The fire investigation report concluded with the following statements:

“In view of the above, we are of the opinion that moisture and contaminants within the meter has been a major factor in the meter failures and ensuing fires.”

“As there is some danger with destructive meter failures and potential resulting fires, we recommend that the existing Sensus Generation 3.3 meters be replaced as soon as possible.  As the existing meter fires have had a close relationship to precipitation levels, SaskPower might wish to consider replacement no later than the end of winter and before the spring thaw and spring rains begin.”

Just to be clear, the fire investigation report reveals that the principal problem is  primarily rain water  (and/or condensation along with other contaminants) that gets into the smart meters themselves, causing arcing across electronic components with eventual catastrophic failure of the meter with a possible explosion or fire.  Furthermore, based upon a review of the investigative report, it is clear we basically have “cheap” meters with a number of design deficiencies which includes uninsulated busbars in close proximity to printed circuit boards and which further allow easy entry of water and dust into the meter enclosures.

Bottom line, … the existing smart meters on people’s homes still present a fire risk in Saskatchewan and elsewhere.  In addition, these types of problems would not occur with traditional analog meters that do not contain fragile electronic components.

As a supplement, this website will quote a portion of an October 28, 2014, article in the Leader-Post entitled SaskPower smart meters a ‘catastrophe’:

“Lest there still be any doubt how badly bungled the SaskPower smart meter debacle was, consider how frequently lawyers, technical specialists and others used the word ‘catastrophic’ in their joint review released Monday.

‘When additional information about smart meter fires from other sources came to light, the risk of catastrophic meter failures did not prompt an independent re-evaluation of the risk related to Sensus smart meters.

An escalation of the risk assessment could have prompted additional investigation, testing and either closer monitoring of installed meters or a pause to the rollout of smart meters until issues were better understood.’

‘Catastrophic’ in Monday’s report refers to not just the eight fires started by the smart meters, but occasions when things like smoking in the smart meters – largely due to moisture or debris getting inside what should have been a sealed casing – might have easily led to fires.  In all, there were some 359 incidents of meter failure, although the majority were for things like improper readings.

Yet according to the review – [comprised] of three separate reports by Ritenburg and Associates looking into technical issues, Robertson Stromberg commissioned to look at legal matters, and PwC asked to review procurement and contract management – little or no thought was ever given to the inherent risk of catastrophic events.”