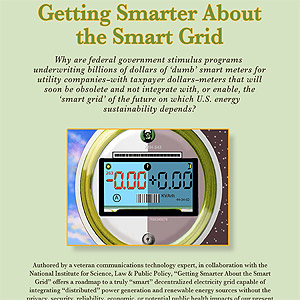 Billions spent with taxpayer dollars on “smart meters” will not lead to U.S. sustainability; Place citizens and economy at risk

WASHINGTON, D.C. — November 26, 2012. A new policy report focused on the electric grid and economy of energy, “Getting Smarter About the Smart Grid”, was published today by the National Institute for Science, Law & Public Policy (NISLAPP) in Washington, D.C. The report states that billions of dollars in federal subsidies for “smart” utility meters have been misspent on meter technology that will not lead to energy sustainability or contribute to the possibility of a more efficient and responsive electricity grid.

In the Foreword to “Getting Smarter About the Smart Grid”, journalist and political analyst Duncan Campbell summarizes, “Dr. Schoechle examines and explains the prevailing confusion about the “smart grid” and offers a clear path forward, lucidly showing an alternative to patching up our overly-complex, vulnerable, and increasingly expensive energy system—thus creating a truly smart and genuinely sustainable electricity system.”