After recently reporting on smart meter-related fires in Canada, Pennsylvania, Oregon, and Florida, the latest reports are coming out of Nevada.

As reported by the Reno-Gazette-Journal on September 13th:

“The Reno and Sparks fire chiefs are asking the Public Utilities Commission to investigate the safety of smart meters installed by NV Energy on homes throughout the state in the wake of a troubling spate of blazes they believe are associated with the meters, including one recent fire that killed a 61-year-old woman.”

The utility company (NV Energy) maintains that the death of the woman in late July is not related to a smart meter, yet a forensic expert hired by the City of Reno wrote that the smart meter cannot be ruled out as the source of blaze and states that:

“Data tends to suggest the meter may have failed.” 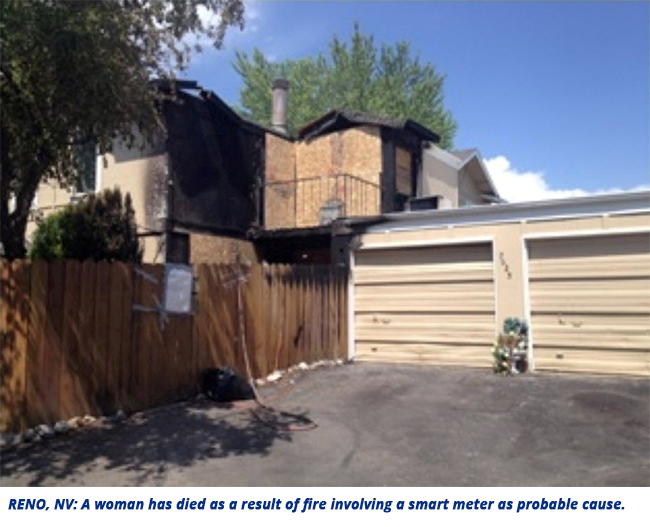 Although the definitive cause of the Reno, Nevada fire-related death remains in dispute, the Fire Chiefs from both Reno and Sparks, Nevada said they have become increasingly concerned by the number of blazes that appear related to the smart meters.

Of the nine fires in Reno and Sparks that appear to be linked to the smart meters, seven resulted in minor property damage.  But one of the fires in Reno burned a man’s face.  The meter burst into flames when he flipped a breaker switch, scorching him.  He put out the flames with a fire extinguisher and was treated at a local hospital.

The forensic investigator that examined the Rhinestone Circle smart meter (where a fire resulted in a death) also examined three more smart meters associated with fires in Reno and Sparks.  He found evidence that each of the three meters—one from Reno on Arletta Drive and two from Sparks—failed.  “It is probable the Arletta meter did fail, resulting in the ignition of the fire,” wrote the investigator.

Fire officials say that smart meter fires are particularly concerning because they start on the outside of the house, won’t be picked up by indoor smoke detectors, and can escape immediate notice.  “The occupants inside may not even be aware the house is on fire.  This is very alarming to me,” said Sparks Fire Chief Tom Garrison.

NV Energy utility representatives generally won’t even use the term “fire.”  They state that the company has responded to 70 “consumed meters,” describing a consumed smart meter as one that has had its plastic casing “melted or breached and there can be soot.”

Fire Chief Garrison said it’s difficult to tell homeowners how to react at this point:

“I would say be very aware, very vigilant about any type of potential electrical problem they might see in their home,” he said.  “If you noticed any burned electrical panel, any smoke, even if it’s small, wispy smoke, if the meter is extremely hot, or you hear a noise or see any arcing, call 911 and the fire department will come out and ensure the meter is properly checked.”

We have a suggested simple and safe solution to the problem.  Get rid of all so-named smart meters.  Let’s do it for the sake of life, and property – as well as peace of mind.

In an updated article from the Reno-Gazette-Journal on September 16th:

“Almost two years after he issued a report finding ‘no systemic fire problem’ associated with NV Energy’s installation of smart meters on homes across the state, Nevada Fire Marshal Peter Mulvihill said new information has come to light that warrants further investigation into whether the meters are safe.

Mulvihill acknowledged that the data he relied on to determine that NV Energy’s smart meters did not pose a fire threat was incomplete, but said his findings were valid at the time.

This year, Mulvihill said his office has received two reports each from Reno and Sparks in which investigators ‘conclusively found the meter to be the origin.’”

Source Material for this Article: