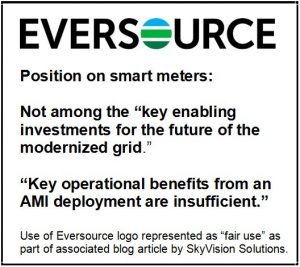 On July 30, 2015, the New Hampshire Public Utilities Commission issued an ‘order of notice’ commencing an investigation into grid modernization in New Hampshire.  In response to that order, Eversource Energy (formerly known as Northeast Utilities) provided comments on September 17, 2015.  As stated by intelligentutility.com:

“While smart meters or AMI meters are often equated with grid modernization, Eversource does not see them as necessary.  In fact, the company says that it has found customers are not very interested in moderating energy use based on time-varying or dynamic rates.”

The position put forward by Eversource Energy is reminiscent of the original intent of the Energy Policy Act of 2005 which contained language that required utility commissions and utilities to consider whether it is appropriate for utilities to offer customers smart metering for those who request it.

SkyVisions Solutions has reviewed the comments submitted by Eversource Energy to the New Hampshire Public Utilities Commission.  This article primarily presents selected quotations from those comments as they apply to smart metering and time varying rate (‘TVR’) programs.

“Eversource does not believe smart meters and/or AMI are key enabling investments for the future of the modernized grid.  As demonstrated by Eversource’s plan in Massachusetts, there are many more cost effective technologies that can help meet the grid modernization objectives that Eversource considers to be key in any modernization program.”

“Key Operational Benefits from an AMI Deployment are Insufficient.  Eversource’s analysis also indicates that the incremental operational benefits of moving to an AMI platform are insufficient to warrant the increased cost.”

“[T]here are many factors that support Eversource’s proposal to focus on an opt-in of [time varying rate] TVR program instead of an opt-out TVR program.  But most importantly, a strong opt-in TVR program will provide for a much better customer experience and satisfaction as customers will be presented with an option to participate and control their energy costs.  In an opt-out program, customer experience will be negatively impacted as many customers will feel dissatisfaction at having [been] placed in a program without any opportunity to participate in the decision-making process.”

“In addition to the legal and logistical issues related to the deployment of Advanced Metering Infrastructure (‘AMI’) in New Hampshire, Eversource believes that a broad-based deployment, or a multi-stage roll-out, of smart meters or AMI is not cost-effective for New Hampshire customers.  In its recently submitted grid modernization plan in Massachusetts, Eversource conducted a careful analysis of the costs and benefits of a broad deployment of AMI and found such deployment to be highly cost ineffective.

On the cost side, AMI deployments experience a set of high fixed upfront costs beyond the smart meters themselves.  Investments in communications (including cybersecurity and data privacy) that are substantially greater than would be otherwise needed achieve a modernized grid, meter data management, billing, and other IT systems are required before benefits can be accrued and these investments can and do take years to actually implement.  In addition, there are significant O&M costs required to manage the systems and the data provided by AMI.  Finally, there might be other alternatives that could leverage third-party investments in communication technologies that could provide similar capabilities to AMI but at lower costs to our customers.

On the benefit side, several of the benefits that AMI can provide require making assumptions about customer behavior that are highly uncertain.  Pilot programs have shown that residential customers who engage in dynamic pricing do shift load in response to price signals and that the response is stronger when linked to smart thermostats.  However, pilot results also show that customer interest and engagement is very low.  Data analyzed by Eversource indicates that consistently across relevant dynamic pricing pilots offered in the United States, fewer than 25 percent of customers sign-up for these new rate structures.  These pilots indicate that low adoption is not the failing of marketing materials or the limits of technology, but indeed that few customers are interested in these types of time varying rate (‘TVR’) structures.

As one example, Eversource in Massachusetts conducted a dynamic pricing pilot that showed that although customer interest in the pilot was relatively strong initially, it was very challenging to convert initial interest into participation in the pilot and then sustain the interest over time.  The pilot findings included that out of the 53,000 customers contacted initially regarding participation, only 1,549 were enrolled in the pilot at the end of 2013, a 3 percent response rate. Similarly in Connecticut, a pilot conducted by Eversource also showed that the peak load impacts were gathered from only 3.1 percent of residential customers contacted.” 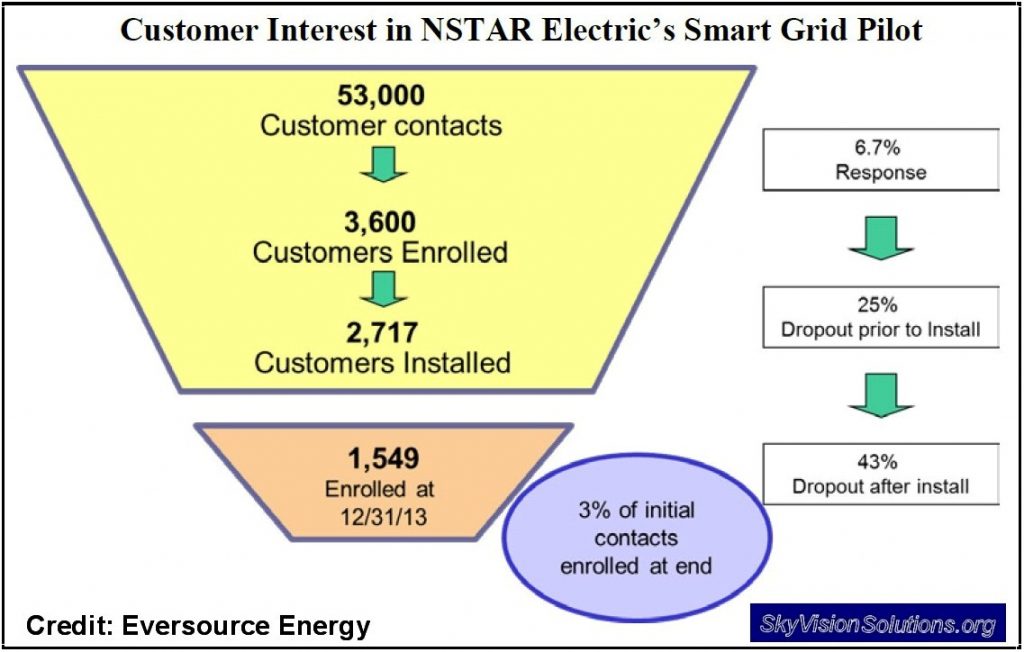 “The benefit of an opt-out TVR program and [a full] AMI implementation will not be realized unless there is an aggregate response that actually reduces customer load on peak at system level on a material basis.  Residential customers do not have the large discretionary load to shift in order to have a material impact on the … peak system load.”

“TVR Programs can negatively impact low income customers and those customers who cannot shift load due to medical or other conditions.”

“Air conditioners offer the greatest opportunity for residential load reductions, but the estimated central air conditioning (‘A/C’) penetration in Eversource’s service territory is only approximately 38 percent with 2 to 3 months of use per year, compared to higher penetrations in warmer states, such as Maryland, which have 60 to 80 percent A/C penetration rate thus offering the opportunity for more significant load reductions.”

“Moreover, residential appliance data suggests that there is little discretionary load beyond the air conditioner.  This is illustrated in Table 15 – Typical Load in 4-bedroom Home with Central A/C, which shows appliance usage in a typical 4-bedroom home.  Central air-conditioning represents more than half of the household load.  Lighting represents the second highest share.  During peak hours, the air conditioning share of load will be even higher because lighting usage and other appliances are not likely to be in full use.”  [See table below.] 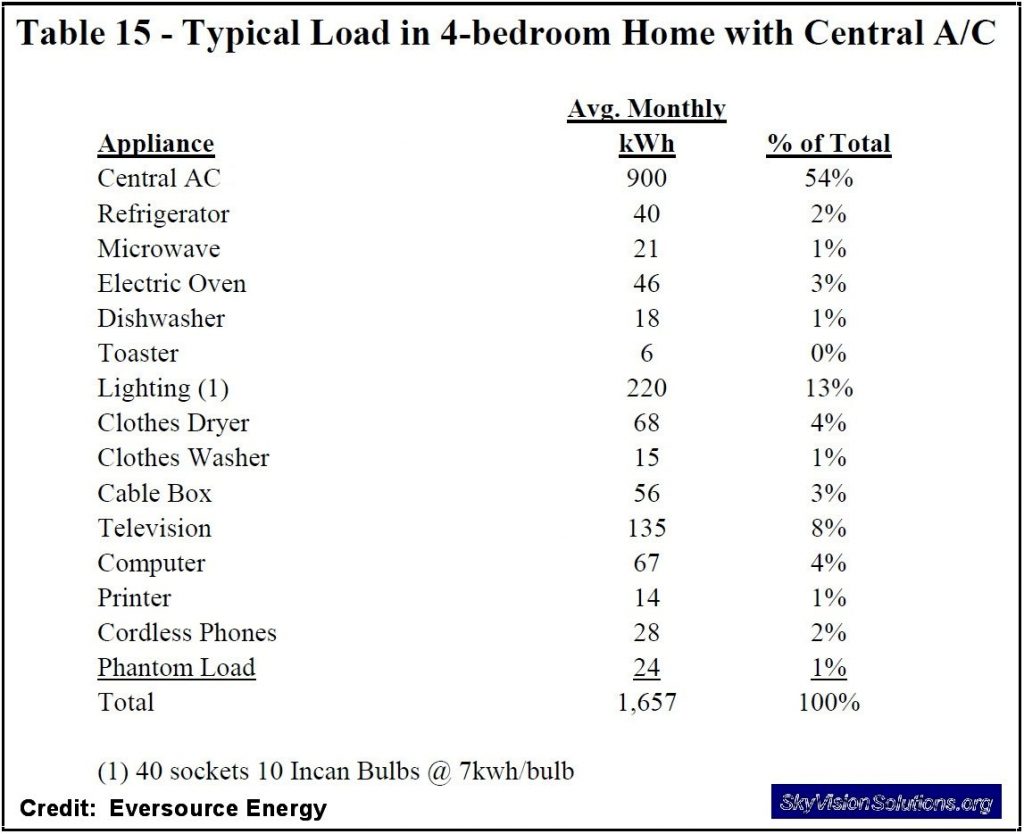 A careful review of the above table exposes the false narrative of the smart grid industry that consumers will be able to save money by doing their laundry between midnight and 2 a.m. as an example.  In fact, even if some consumers made this inconvenient and irrational behavior modification, the substantially higher rates paid during peak periods during the day for other the non-discretionary energy loads would not measurably be offset by these slight changes in overall energy usage patterns.

“[T]he Company is proposing an opt-in TVR Program for all residential and small commercial and industrial customers.”

“The current metering technology in general use for residential and small commercial customers records a single total kWh consumption value which is then collected via drive-by Automated Meter Reading (‘AMR’) on a monthly basis.  In order to fulfill the metering requirements needed for either of the proposed opt-in TVR rate options (TOU/CPP or targeted TOU), customer consumption will need to be recorded in either hourly or sub-hourly interval lengths via a more advanced meter than the basic AMR meter, currently in use.”

“For customers who opt in to either the proposed TOU/CPP or Targeted TOU rate, the Company will install different metering equipment depending on the customers’ needs.  The selection of which communications options best fits customers’ needs will depend on the availability of the communications infrastructure with the lowest overall costs.”

In summary, the comments filed by Eversource Energy reflect nearly the same perspective voiced by SkyVision Solutions over the past couple of years:

The Eversource Energy comments were substantiated with facts and figures.  Let’s hope other utilities read them, study them, and decide to change course away from the misguided and costly mindset that everyone needs a “smart” meter.

Source Material for this Article

Updated, October 7, 2015:  It appears the above article link is no longer valid.  Here is an archived version:  http://web.archive.org/web/20150930220638/http://www.intelligentutility.com/article/15/09/new-hampshire-utilities-grapple-confusion-over-grid-modernization