23 comments
Josh del Sol
479 views
23 comments
FAT CAT IS OUT OF THE BAG: Evidence has now been made public of illegal actions and collusion between former California Public Utilities Commission president Michael Peevey and utility PG&E, as criminal investigations continue.

FAT CAT IS OUT OF THE BAG: Evidence has now been made public of illegal actions and collusion between former California Public Utilities Commission president Michael Peevey and utility PG&E, as criminal investigations continue.

As part of a federal and state investigation into what appears to be systemic corruption involving former senior executives at PG&E and the California Public Utilities Commission, 65,000 emails have been publicly released, revealing collusion and conspiracy.

Former commission president Michael Peevey and former PG&E Vice President Brian Cherry are wishing investigators would have been kept in the dark. The pair privately discussed problems with so-called “smart” meters, violating their own rules of procedure while admitting to health harm and overbilling problems – which several thousand Californians had been warning about since 2008.

It is perhaps justly ironic that we now see, made public, the private email correspondence of those who have teamed up to deploy technology which, according to a 2012 US Congressional Research report, facilitates unprecedented in-home surveillance.

Here are some highlights from their correspondence:

And he believed PG&E should do something about it, albeit “quietly”. However, instead of regulating the utility to ensure public safety, he deferred his lawful duty to PG&E – the entity causing the harm. 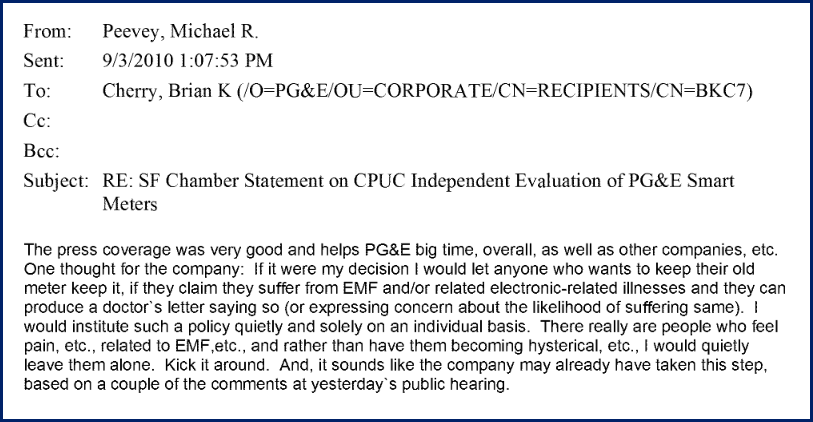 “Peevey wanted PG&E to keep it quiet,” writes Sandi Maurer, Director of the EMF Safety Network. “He didn’t want other customers, or the rest of the world to know there’s a problem with smart meters causing customers pain.”

2) Peevey said after a “smart” meter was installed on his vacation home, his bill more than doubled.

Sunday’s LA Times reported this one. “Obviously something is wrong,” Peevey wrote to Cherry in 2011. “I would like an explanation.”

PG&E reacted immediately to perform a “deep dive investigation” into the billing situation at the 3,118-square-foot Sea Ranch home on the Northern California coast.

There have been tens of thousands of billing complaints in California, revealing a widespread, systemic overbilling problem which appears to be the case everywhere “smart” meters are installed.

3) Peevey and Cherry colluded to permanently delay hearings until the “smart” meter rollout was completed.

As noted in EMF Safety Network’s January 22 appeal for rehearing, an email from Cherry to Tom Bottorff – a senior VP who left in disgrace but received $1.1M in severance pay – outlines the CPUC conspiracy to delay “smart” meter hearings until all “smart” meters had already been installed:

“Mike [Peevey, the CPUC president] grumbled about the CCSF PFM [City and County of San Francisco Petition for Modification] and the folks in Sebastopool [sic] who want to delay SmartMeter implementation. He implied that this wasn’t going to happen and that by the time the Commission got around to acting on it, we would have installed all of our meters.”

In fact, not all of the “smart” meters have been installed in California – as thousands of customers have refused and 57 local governments don’t want them – and there are now obvious issues with those that were installed.

Thanks to multi-year efforts of advocate groups like EMF Safety Network and StopSmartMeters!, the cat is now out of the bag as to how dangerous and corrupt the grand plans of people like Michael Peevey have been. The CPUC and PG&E knew that people were being harmed and they colluded to silence the truth.

The story continues to unfold

We encourage you to stay tuned as more revelations come out by the day. With the judge-shopping scandal, ex-Commissioner Peevey’s home computers, hard drives and smart phones were seized in January by investigators. This has already led to more evidence of collusion in the multi-billion dollar bailout of the San Onofre nuclear power plant in 2013.

As utility and political leaders from around the country toasted Michael Peevey last night on a “job well done”, truth advocates will continue to sift through emails. We can only guess what will be revealed in the coming months. However, it appears that it won’t be a comfortable retirement for those who broke their own rules and brushed aside safety in order to push through the multi-billion dollar boondoggle that is the wireless “smart” grid.

Jeromy Johnson runs a leading EMF website that helps families find solutions to reduce electromagnetic pollution in their lives. He has an advanced degree in Civil & Environmental Engineering and has worked in Silicon Valley for 15 years. Nearly four years ago he became electro-hypersensitive (EHS) after sleeping next to a bank of wireless smart meters. Through the process of regaining his health, he has discovered how to use technology and create living environments in ways that are conducive to good health. You can learn more at his website www.emfanalysis.com.